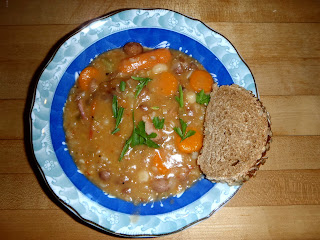 
By Week 29 of my ethnic cooking project,  I had made and enjoyed most of the classic Slovenian soups.  All except for one.  Ričet. (Reach-ett.) Slovenian barley-bean soup.

From what I read, ričet is considered a humble dish, but it is still a favorite in Slovenia today.  It is something like minestrone, with a fair amount of latitude with the ingredients.

But I balked.  It was all because of the barley.  I had never cooked with it.  I had unfortunate memories of a canned barley soup from my childhood, called (I think) Campbell's Scotch Broth.  Those pale, soft, slimy globules of barley made me feel squeamish. And I hadn't actually seen a soup called ričet in my trio of Slovenian American cookbooks.  So maybe I was off the hook.

But then I spotted a  recipe for "Barley Soup Dinner" in The American Slovene Club's Our Favorite Recipes.  No doubt about it.  It was ričet.  So I gave in.

I used that recipe as a foundation.   I did add a few additional touches, like parsley root (another new ingredient for me) from the ričet recipe in the 1988 Yugoslav Cookbook.

I was not optimistic. 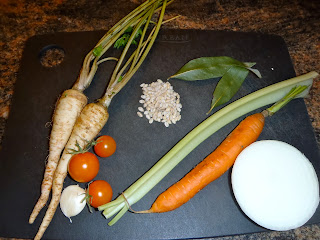 
First, prepare the barley and beans together.  If you plan ahead, you can soak them overnight.  I used the quick soak method:  Rinse and drain the uncooked barley and beans.   Place them in a large pot or Dutch oven.  Add water to cover, bring to a boil, then cover and let sit for 1 hour.  Then drain again, cover in fresh water, and simmer for 1 hour.  This time, do not drain.

Next, add the remaining ingredients to the pot of barley and beans. Simmer for 1 more hour or so.  Adjust the seasonings.  Garnish with parsley and serve. 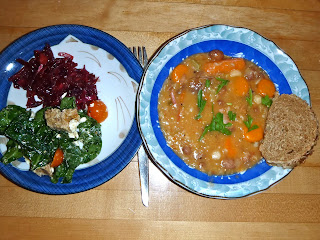 The verdict:  Mild but flavorful. Easy to prepare.  And the barley wasn't slimy at all.   It tasted very much like a white bean with bacon soup I had enjoyed in the past.  Nothing like the Campbell's variety.

So I mentioned it to my mother, figuring she would be surprised.

"So Mom, I made this Slovenian barley soup.  I thought it would be slimy.  But it was pretty good. Grandma never cooked with barley, did she?"

"But her barley was NEVER slimy."

____
Here is an amazing 1950s commercial for Campbell's Scotch Broth, my barley turn-off from childhood!