Slovenian Dinner Week 30: Spareribs and Sauerkraut: This Ain't No Barbeque! 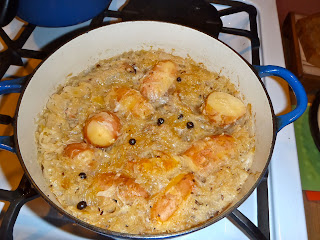 In planning my Week 30 dinner, I had to work around a challenging schedule.  I had a late afternoon eye appointment.  And then from 6-8, my husband and I were hosting an annual neighborhood meeting.  Fortunately, it was out on the street in front of our house, and not inside.  But I still felt a little harried.

I needed to figure out a menu that could be made in advance and re-heated quickly for what would be a late dinner.  And since I might be cooking with dilated eyes, it would help if the dish wasn't too complicated.

I had been thinking about ribs for awhile.  Slovenians like them.  I had eaten them at Slovenian Hall events and seen recipes in my vintage cookbooks.

But we are not big fans of ribs.  My husband doesn't care for them. I think of ribs as an occasional guilty pleasure.  Too fatty and mostly just a vehicle for barbeque sauce.

I had made ribs myself perhaps once, years ago.  All I recalled was that they need to be parboiled before they are grilled or baked in the oven.

I found a straightforward recipe for Spareribs and Sauerkraut (Rebrca v zelju) in Treasured Slovenian & International Recipes, the 1950s cookbook issued by the Progressive Slovene Women of America. It was definitely no-frills: Cut up ribs, boil for 2 hours, add some sauerkraut and caraway seeds.  Serve with boiled potatoes.

I planned to doctor up  the sauerkraut, along the lines of my roast sauerkraut recipe. For convenience, I could do the initial cooking earlier in the day and refrigerate.  Another plus: by pre-cooking, I could skim off some of the extra fat.  And why not just add the potatoes along with the sauerkraut, toward the end?  It would be a perfect one-dish meal, along with a salad.

So that's what I did.  After simmering the ribs for an hour, I refrigerated the meat and broth separately and went off for my eye exam.  When I got back home, I made the mistake of doing a little research on the Internet.

I hoped to figure out how much longer the parboiled ribs needed to cook.  But I discovered that I might have committed a major faux pas.

I had pre-cooked the ribs.  Worse yet, I had boiled them.

NEVER boil ribs, many voices proclaimed.  “It's like making pork soup,” suggested one devotee of ribs.  It's an old-fashioned approach that's passé, many agreed.

One fellow put rib-boiling in the same category as “accordion, reality TV, and karaoke.”

So I continued with a certain loss of confidence.


Baby Back Ribs with Sauerkraut and Potatoes

Cut meat into 2-rib sections. (This will probably create 4 portions). Place ribs in Dutch oven with water to cover.  Simmer for 1 hour, then remove meat from broth and refrigerate both separately for several hours.  Skim fat from surface of broth.  (I also used a paper towel to strain further.)  Bring broth to a boil.

While the broth is heating,  dice the onion and brown in oil in a skillet.  Add the sauerkraut and seasonings and continue to brown. Taste and adjust seasonings.

When broth has come to a boil, add the onion and seasoned sauerkraut mix.  Add the ribs.  Let simmer for 1 hour, then add small whole potatoes and simmer for another hour. Toward the end of the cooking period, add wine if desired and adjust the seasonings. Garnish with parsley to serve. 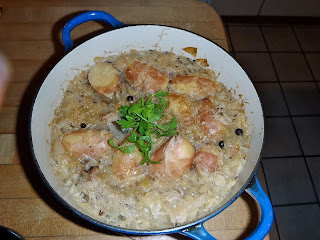 The verdict: Surprise! It was pretty good. My husband-the-rib-hater enjoyed it even more than I did. The ribs were very tender and had little fat. The flavor was good.

Yes, this was a stew-like dish. A far cry from good old American barbequed ribs. But that's not really the point, is it?