As always, the day before Christmas was busy.

I had completed most of my gift wrapping.  So I had time for some last-minute baking, before I put together the main dish for our Christmas Eve dinner.  The meal would be simple and small, but joyous, because our two adult sons, plus a girlfriend, had just flown in for the holidays.

I made a fresh batch of potica so it would be ready to serve on Christmas Day, when we would be joined by my mother, my brother, and another young friend.  For two of the loaves, I tried something new: poppy seed filling. For the other two, I stuck with the family favorite, a traditional nut-honey filling.  Pecans, this time, instead of walnuts.

One of our sons is a vegetarian. I had been trying to come up with a festive main dish.  Something with phyllo seemed ideal.

I decided on spinach cheese pie, a popular dish throughout the Balkans, where it is known by a variety of names.  In the former Yugoslavia, is seems to be moister than Greek spanakopita, the version that is most familiar to Americans.

When I served dinner, my journalist son recognized it immediately.

"That's zeljanica," he said.  Green pie.  That's the name used in Kosovo, where he now lives.

Recipes for both these tasty dishes will be posted in the new year. 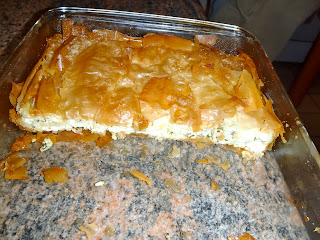