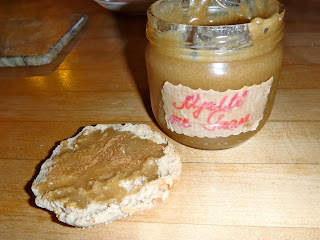 I received a couple of delicious Christmas gifts from Kosovo, where our visiting journalist son now makes his home. They were twin jars from a store called Sacro, the first organic food shop in Pristina, Kosovo's capital. One contained mountain honey, or mjalte bjeshke in Albanian. The other held a concoction I had never heard of: honey-tahini spread.

The honey-tahini combination turns out to be popular in many other places, like Greece, Turkey, and even Israel. It is a familiar flavor, similar to sesame seed halvah. The texture reminds me of the honey butter we used to buy at the grocery store when I was a child in Cleveland.  But this exotic delicacy is even more thick and decadent, and with a far more complex flavor than honey butter.

I am sure you could make your own.  But it is much better if it comes from the Balkans.

I discovered a wonderful use for this luscious spread one January morning, when I wanted to make cinnamon toast for breakfast.  My husband and I always celebrate the anniversary of our first date. This was the morning after.

Cinnamon toast has always been a sentimental favorite.  When I was growing up, my mother used to make it for us as a special treat. It was also the first dish I ever prepared for my husband.

We were college students at the time.  Our first date had lasted until the wee hours. So I invited him in for some cinnamon toast and perhaps some tea.

Cinnamon toast is a simple treat.  Nursery food.  Nothing more than toasted white bread, buttered, sprinkled with cinnamon-sugar, and then browned under the broiler.  It is a good example of what my husband and I came to call "Protestant food."  It was our little joke, a tongue-in-cheek commentary on my midwestern family's rather tame foodways.  In comparison, the cuisine of his east coast Jewish family seemed positively exotic.

But this morning we had a problem. No butter in the house, since we were in our post-Christmas austerity phase.

So I made do with what was at hand. Healthy, whole grain English muffins. That delectable spread, with tahini instead of butter, and honey in place of sugar.  And a final sprinkle of cinnamon, to cut the sweetness. 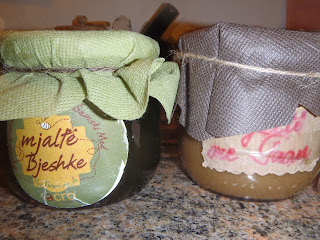 
Split and toast the English muffins.  Cover with a good spoonful of honey-tahini spread, either from Kosovo (if you are lucky) or homemade. If that sweet mound is too thick to budge, just put the muffins under the broiler to warm and soften the spread. Then smooth it into an even layer and sprinkle with cinnamon. Put muffins back under the broiler briefly.

Serve with plain Greek yogurt on the side.