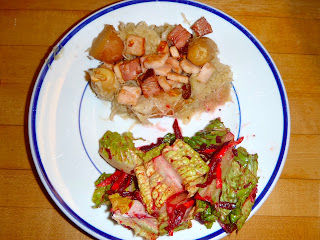 
It was the second Tuesday in November.  I had a busy day ahead and hadn't given much thought to dinner.

As my husband was heading out the door, he dropped a few hints.  We had a nice jar of organic sauerkraut in the fridge. And, since he figured I would be going to the butcher shop, perhaps I could order the turkey for Thanksgiving.

Sauerkraut and turkey.  That planted a seed. And it fit right in with a question that had been on my mind, as my year of ethnic cooking was coming to a close.

No worse, probably, than any other cuisine that evolves in times of scarcity, when people do hard physical work.  Especially in northern climates in the past, when people were limited to whatever was in season—or whatever they had managed to preserve.

That is the beauty of sauerkraut, a staple in so many Eastern European cuisines. Served fresh, cabbage is a healthy food.  But it is easily preserved through simple fermentation, rather than canning.  More and more, we are coming to recognize the health benefits of fermented foods.

But there is no denying it: Many elements of traditional Slovenian cooking make a contemporary health conscious cook cringe.  It is heavy on meat, primarily pork. The fats aren’t the healthiest: lard, cracklings, bacon fat, and butter.  And so many of the famous delicacies (potica,  homemade noodles, struklji,  zlikrofi, dumplings) are based on white flour.

But I knew that it was possible to do healthy makeovers.  I had been doing it myself.  From the beginning of my cooking project, I used olive oil in place of other fats, except for baking.  I was pretty sure that contemporary Slovenian cooks were doing the same thing. The Slow Food movement is big there.  A recent president was a vegan, for heaven’s sake!

So I started hunting around on the Internet for healthy-looking Slovenian recipes with sauerkraut. I  found the perfect example:  Potatoes with Sauerkraut and Crunched Smoked Turkey Ham, a modern adaptation of a traditional Slovenian dish.

The recipe was on a blog I had seen once before. Indulging Life is the creation of a Slovenian woman named Mateja, who now lives in the United States. Her blog is stylish, beautifully photographed, and with a fair share of luscious desserts and clever food adaptations.  She would have fit right in at the recent FoodBuzz Blogger Conference I attended.

This looked like a simple dish, similar to some I had already made, and with the same sorts of substitutions: turkey and olive oil instead of pork and bacon.  It even included garlic, not always a part of traditional Slovenian cooking. I was intrigued by Mateja's suggestion that cooking potatoes in the sauerkraut pickling liquid prevents them from getting mushy. I had never thought about that.

This dish looked simple and tasty. It had an elegant presentation—and it was validating, to have a Slovenian cook doing healthy makeovers while still holding on to her traditions.

I already had a few ideas for a some tweaks I might make: Small, multicolored organic potatoes, with the skins left on.  And maybe a few juniper berries and caraway seeds, my usual addition to sauerkraut.  I’d learned about this from a recipe on the Slovenian government’s tourist website, so I know it was legit!  And probably less oil.

When I went to the butcher shop around the corner, I encountered a problem: No turkey ham, much to my surprise.  The man behind the counter suggested smoked turkey breast would work just fine.  But I thought it would be better to combine it with turkey bacon, so I bought a few thick slabs of both.

This would be an easy dish to prepare,  I thought.

And it was, except for a fight to the death with that jar of sauerkraut!  I couldn't seem to open it. Not even with that special rubber gripper, tagged with the logo of a Slovenian fraternal organization that I had picked up at a Pust celebration a few years ago.  I tried tapping the lid with a knife.  Holding it under running water. Twisting with the help of a rubber band.  Nothing worked.  I was desperate.  Finally, a brainstorm: I used a can opener to punch a hole in the top of the metal lid.  There was a whoosh as the seal broke.  By then, of course, the potatoes had practically boiled dry, so I had to add more water and start over.

No matter. It all worked out. 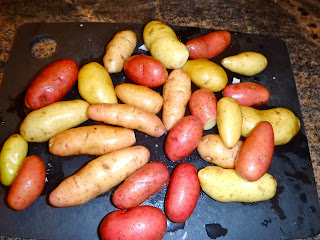 Below is my adaptation, roughly double the quantities in the original recipe, which is supposed to serve two. Along with the addition of juniper berries and caraway seeds, I increased the garlic.  That part was my husband’s doing.  I had asked him to chop up two cloves.

I couldn’t bring myself to use a half cup of olive oil, so I cut it way back.  And I used that turkey breast-plus-bacon combination instead of turkey ham, out of necessity. 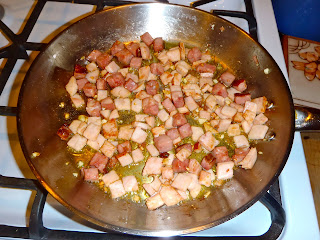 Sauerkraut with Potatoes and Smoked Turkey Bits (adapted from Mateja)

Wash potatoes well, leaving skins on.  Cut larger potatoes in half.  Place in large pot, add water to cover, add seasonings, and bring to a boil. Add sauerkraut with liquid, combine, bring to a boil again, then lower heat and simmer uncovered until potatoes are tender. Most of the liquid should have been absorbed or cooked off. Cover and keep warm.

Heat olive oil in large skillet.  Add turkey cubes and cook, stirring occasionally,  until they are “browned and crunchy," as Mateja says.  Add garlic for the last few minutes. 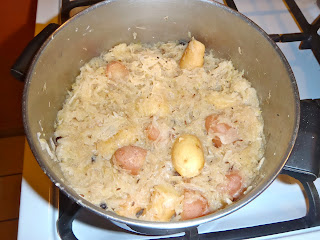 The verdict:  Very good.  It could probably use even more smoked turkey. Or maybe it’s just that I added some of the extra sauerkraut that was left in the jar.  I'm glad that I spiced up the sauerkraut.

As for the topping:  The original version is probably even tastier, although higher in fat. Next time, I will probably try to use all turkey ham or turkey bacon, and skip the milder turkey breast.  If I am feeling Indulgent :-) I might also add more olive oil.  Using the full amount will turn the cubes into deep-fried little "crunchies," as Mateja calls them.

All in all, this is an easy, elegant, healthy version of a traditional Slovenian flavor combination.