The New Year Begins: Pausing to Reflect. (When in Doubt, Think Soup!) 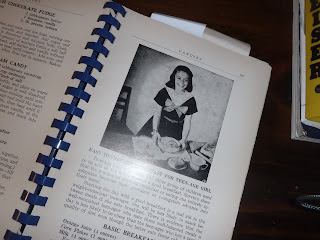 It was the second week in January.

New Year's Day had been celebrated.  Our sons had flown back to their respective homes.  We were back to our regular work schedules.   Life returned to normal.

My year of Slovenian cooking had come to a successful close. Fifty dinners.  So many kitchen adventures.  New family stories had emerged.  It had been quite a journey.

It seemed like a good time to pause and reflect on what I had learned.

It was also time for my traditional post-holiday belt tightening.  So a short break from traditional Slovenian cooking seemed in order.  Dumplings, noodles, homemade white bread, strudel, and potica wouldn't be of much help if I wanted to  get rid of the couple of extra pounds that always seem to accumulate during the holidays.

But I wasn't ready for The Austerity Kitchen.  And I wanted to carry the Slovenian spirit into the coming year, even if each week didn't bring a full-blown traditional dinner.

When in doubt, think soup.  That was one lesson I had learned from my year of Slovenian cooking.  I had just spotted a tempting recipe in Smitten Kitchen, a wildly popular cooking blog that recently evolved into a cookbook.

It was called Lentil Soup with Sausage, Chard, and Garlic.  The recipe, not to mention the photos, looked wholesome and inviting. I figured I could make it even more diet-friendly.

To reduce the fat,  I used less oil for browning and skipped the sizzling oil and garlic finish altogether.  Turkey sausage would be a healthier choice than Italian sausage.  I used the kale option instead of chard, simply because we had it on hand.  And parsley and mushrooms show up in so many Slovenian dishes, so why not add them, too?

And here was the one serendipitous touch.  I had already started the soup when I discovered the brown lentils I thought we had had in the pantry were actually whole buckwheat groats.  I had never heard of buckwheat or kasha in soup but it was too late to turn back.  And with the addition of buckwheat, this soup would definitely qualify as Slovenian-inspired!

The verdict?  It was delicious.   Healthy and hearty.   And if not exactly traditional, it was in the Slovenian spirit.  A good start to a new year of cooking: Slovenian-inspired, but lighter and healthier.  I had no idea what was in store! 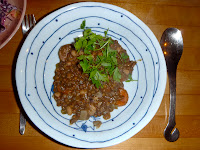 Brown the onion and garlic in olive oil.  Add celery, carrots, and mushrooms and continue to brown. Add sausage and cook a few more minutes.  Add buckwheat, parsley, bay leaves, seasonings, tomatoes, and water.   Simmer until the buckwheat is tender, 30-40 minutes.  Add kale toward the end of the cooking period.  Taste and adjust seasonings.  Garnish with grated parmesan cheese and additional parsley.
Posted by Blair K. at 11:07 PM