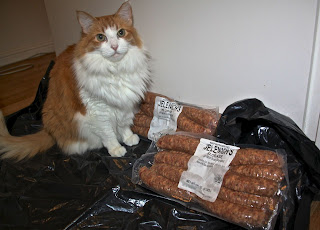 That was the big question I faced, at the beginning of the new year.  As usual, I had a few holiday pounds to lose.  Beyond that, I wondered: How much of my newfound taste for Slovenian food could I incorporate into our regular diet during the coming year?

I had already started to think (and write) about this question in the fall.

Back in November, I argued that traditional Slovenian cooking was much like other cuisines that develop in times of scarcity, when people did hard physical work. They used what was at hand and were limited to whatever was in season—or whatever they had managed to preserve.

I conceded that many elements of traditional Slovenian cooking present a challenge to the contemporary health conscious cook. The cooking is heavy on meat, especially pork. Fats are not what you could consider heart healthy: lard, cracklings, bacon fat, and butter.  And many of the favorite treats are based on white flour.  I had made them all: potica and strudel, homemade noodles and dumplings, struklji and zlikrofi.  But I had also started to do healthy makeovers. 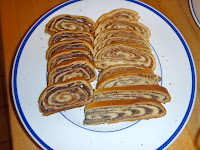 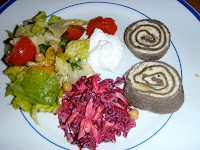 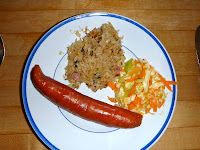 Now, six months later, I would add a few other arguments in defense of Slovenian food.

First, whose culinary traditions are we talking about? European peasant farmers in the 19th century? The upper classes?  The Slovenian Americans who wrote my 1950s cookbooks?  Contemporary Slovenians?  Eating patterns varied and they evolved over time.

In reality, the diet of peasant farmers was healthier than you might suppose. It revolved around whole grains and legumes: Buckwheat, millet, cornmeal, and barley.  Dried beans and lentils.  The daily bread meant whole grain, not refined white flour.  Meat was eaten sparingly, by today's standards. Fresh vegetables and fruits were highly prized. Slovenians never forgot their rural roots, in Europe or in the United States.  Even in big American cities, families kept gardens.  In the past, it was all Slow Food.  Local, natural, and unprocessed.

Another important point: Ethnic specialties were just that: Special dishes. Delicacies. Served on holidays, special occasions, and to guests.  Not daily fare.

Heavy on carbohydrates, by today's standards?  Yes.  But not inherently unhealthy.

In fact, the traditional Slovenian diet of the past was probably healthier than many other European cuisines. Consider British food. The typical Slovenian of today probably has a healthier diet than the average American, if obesity rates are any indication.

I already knew that healthy makeovers were possible. From the beginning, I had substituted olive oil for other fats and had cut down on quantities.  As the year progressed, I began to use turkey instead of red meat.  I tried low carb experiments, like cauliflower instead of rice, in stuffed cabbage, or a turkey-kasha filling in stuffed peppers.  More than half of my November and December dinners were healthy re-makes of dishes I had tried earlier in the year.


Finally, many of the core ingredients and unique flavors in Slovenian cooking are quite healthy. Cabbage. Coleslaw and sauerkraut. Dandelion greens.  Green salads with light, tart dressings. Buckwheat. Pumpkin seed oil.  And seasonings like paprika, cinnamon, and marjoram are calorie-free. 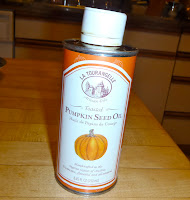 My conclusion:  Slovenian cooking could be part of a healthy diet, with some modifications.

The only personal challenge I faced was limiting the carbohydrates, if I wanted to keep my weight down.  But that just meant sticking to the healthier ones: Vegetables, beans and legumes, with modest portions of whole grains. It wasn't a terrible hardship to limit breads, dumplings, noodles, and potica to special occasions.

My husband isn't as weight-challenged as I am, but he does need to watch his cholesterol and his blood pressure. Although he was a great supporter of my Slovenian cooking adventure, he did occasionally remind me that we had eaten more meat, especially pork, in the past year than in the previous decade!

So I figured we would go back to poultry as our mainstay, including all those locally-made chicken and turkey sausages we previously enjoyed.  Pork, beef, and lamb would be an occasional treat.

I thought I had covered all the bases.  But I forgot about one.

A new chapter was about to begin.