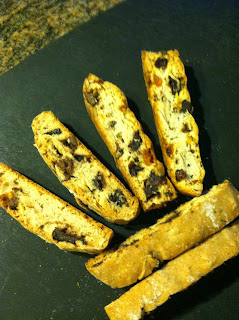 "The eggs are divorced." "Cut the tonsils." "Murder the eggs." "Sexual cakes are rising." "Domestic friends are done."

Does this sound like mayhem in the kitchen? A surrealistic cartoon?  These are choice excerpts from the Google translation of recipes for domači prijatelj, the Slovenian version of biscotti or mandelbrot.  It is my latest addition to the Slovenian holiday kitchen.

Long before the American biscotti craze, I was introduced to mandelbrot, the Jewish version of the popular sweet. By any name, these are among my favorite cookies: crunchy, not-too-sweet, and open to many creative variations.

So I was excited to discover that Slovenians have their own take on the firm, sliced cookie.  Domači prijatelj is usually translated as "domestic friend" or sometimes as "house friend." To a Slovenian, this has a slightly risqué connotation.  My Slovenian professor friend suggests that "paramour" might be a good English equivalent.

Domači prijatelj do not show up in my 1950s Slovenian American cookbooks. But they seem to be quite popular in Slovenia today, judging by the many recipes available online. A search on the Slovenian cooking website Kulinarika turned up seventeen different recipes. (To see the full list, go here.)

At first, I thought domači prijatelj might be a recent import from Italy, but the sturdy sweet has has been around since at least the late 1800s. Several online sources make reference to a handwritten copy of a recipe from an 1877 Slovenian cookbook. Some Slovenian food bloggers follow another simple old formula, translated as:

These proportions are much like traditional Italian biscotti, heavy on the eggs but with no added fat.  Mandelbrot recipes, which usually include butter or oil, result in a  richer and more tender cookie.

One major difference with domači prijatelj: they don't tend to receive a second baking in the oven. Most recipes direct the cook to slice the baked loaf and then let the individual pieces air-dry naturally, perhaps in a cool place. Biscotti, of course,  are always given a second baking (the name translates as "twice-cooked"). This is usually the case with mandelbrot, as well.  I did find a couple of  domači prijatelj recipes that specified a second baking, so I felt on solid ground when I opted to add that second step.

One thing biscotti, mandelbrot, and "domestic friends" have in common:  These once-simple sliced cookies have morphed into something far more complex, as contemporary cooks give free rein to their imaginations.  The Kulinarika site includes a few very simple nut-and-raisin combinations, using hazelnuts, walnuts, or almonds. But most recipes go beyond that. The dried fruits include apricots, coconut, prunes, and papaya.  Chocolate is a  popular addition. Flavorings included lemon and orange rind, rum, vanilla, and cinnamon.  The most unexpected twist: yogurt-covered raisins.

The recipe I chose as a guide from Kulinarika is particularly egg-rich and uses no other leavening agents, which is an advantage for those of us who are watching our sodium intake. Here is the Google translation of the recipe I took as a model.  The original metric measures are preserved in the translation.


I cut this recipe in half and have made two different versions so far.  I wanted to experiment with different add-ins and baking methods.

In Version #1, I used chopped chocolate, almonds, dried cranberries, and dried apricots. To compensate for the absence of baking powder or soda I followed the example of another recipe and  beat the egg whites separately.  I followed the original recipe suggestion to bake the dough in a flat pan instead of individual rolls, before cutting into slices.   With part of the batch, I skipped the second baking, just as that recipe (and most of the others) directed.  The rest of the batch was twice-baked.

In Version #2, I omitted the dried fruit and increased the chocolate and nuts. This time, I did use a low-sodium leavening agent, plus some additional flavorings.  I shaped the dough in long rolls before slicing and twice-baked the entire batch.

For the recipes and the results, read on!


The simplest directions for both versions:  Measure the flour and combine with any leavening agents you may be using.  Set aside.  If you are using dried fruit, place it in a small bowl and add a little brandy to moisten. In a large bowl, beat the eggs, sugar, and any flavorings or extracts you are using until the mixture is thick and lemon-colored.  Stir in nuts, chocolate, dried fruit, and any other add-ins you wish.  Stir in the flour until you have a stiff but sticky dough.

There are a couple of variations you can try in mixing the dough.  You can separate the eggs, so that the yolks are beaten with the sugar and then the beaten whites are folded in.  You can add the flour before or after the nuts, fruits, and chocolate.

If you wish, you can chill the dough to make it easier to handle. (Note that low-sodium baking soda or low sodium baking powder lose their leavening power if not used immediately.)

The dough can be baked in a rectangular pan and then sliced and cut.  I prefer to form it into 2 long loaves, by spooning the dough onto a parchment-lined cookie sheet and then easing into shape with floured hands.

Bake at 350 degrees for 30-35 minutes until brown and firm.  Remove from oven and let cool for 10 mintutes.  Cut into 1/2 inch slices.  If you have baked the dough in a pan, you will want to halve the slices.  Now you have one more optional step to consider.

Most of these Slovenian recipes simply let the slices dry out naturally.  Air-dry in a cool place, some say.  But if you like a harder version, you can take the minority view and give the slices another turn in the oven.  Stand the slices up on the cookie sheet and bake them for about 20 more minutes, until brown and firm.  Let cool on a rack.

Both batches turned out well.  The result is a plain, hard cookie that is closer to biscotti than the richer mandelbrot.

In the photo, the two slices on the right are from Version #1, where I separated the eggs. The two on the left are from Version #2, where I used low-sodium baking soda and cream of tarter. The textures are the same: slightly risen but dense.  It is possible that "regular" baking powder or soda would have resulted in a lighter product, but these were just fine.

As for the merits of twice-baking: I tried it both ways, and prefer to give the slices a second stint in the oven.   It's a matter of individual taste, but in my house we like our "domestic friends" crunchy and hard :-)

Update: A month later, I gave it one more try and came up with the best version yet. For the lightest texture, do use baking soda or powder, and save the add-ins for last.  To see the full recipe, go here.