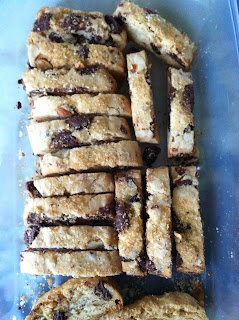 Last week, my husband and I flew to Florida to join his family for Thanksgiving—and for the first day of Hanukkah. We had somehow managed to escape all the buzz about Thanksgivukkah.  We hadn’t yet heard about the "menurkey," a special turkey-shaped menorah created for the occasion.  But my brother-in-law had supplied one for the candle-lighting. And back in New York, our photojournalist son had even been assigned to cover a story in one of the daily papers about the ten-year-old boy who invented the contraption.

Oy vey.  It was too much for a traditionalist like me.

I did decide to get a little creative with one food I planned to make for the double celebration: mandelbrot, one of my favorites among the traditional Jewish sweets I had discovered when I met my husband. I had in mind a fancy version with bittersweet chocolate chips and all-American Thanksgiving cranberries, in honor of the double holiday. I could easily make the mandelbrot in advance, since the hard, crunchy cookies keep so well and are the ideal size and texture for travel.  I knew my father-in-law would appreciate them—as long as they were hard enough.  (He regularly gives store-bought mandelbrot a third baking in the oven, just to be safe!)

I had one additional challenge: Making a low-sodium mandelbrot. So that meant a few modifications to the standard recipe.  No salt, obviously.  And no baking powder, at least of the conventional variety.  I would have to substitute low-sodium baking powder—or low-sodium baking soda plus cream of tartar.  And that meant the dough needed to be used right away instead of chilling it in the refrigerator, as some cooks suggest.

Over the years, I have experimented with many different approaches to mandelbrot. This time, I decided to adapt a chocolate chip-walnut recipe from the folks at King Arthur Flour. Along with the low-sodium modifications, I added dried cranberries and almond extract.  I also substituted almonds for walnuts and used brown turbinado sugar for the topping instead of coarse white sugar.

A final note for those who follow Jewish dietary laws: Because this recipe uses oil and bittersweet chocolate chips that are dairy-free, it can be enjoyed with that Thanksgiving turkey!

The result was so delicious I wanted to share it.  But I worried that it might not be completely kosher to include it in a blog that is devoted to Slovenian and Balkan cooking.

It seemed strange to me that the ever-practical Slovenians didn’t have a sliced, dry cookie like mandelbrot. So many Europeans have a version: Italian biscotti and cantucci, Jewish mandelbrot and kamishbrot, German zweiback and rusk. But I took another look online and discovered many recipes, all in Slovenian, for a sliced biscuit called domači prijatelj.  The name is translated as “domestic friend.”  (This may or may not have a slightly risqué connotation!)  These Slovenian recipes seem simpler and plainer than mandelbrot, but the pictures show something that could easily pass for mandelbrot or the probable source of them all, biscotti.

Whether you call them mandelbrot, biscotti, or domestic friends, these crunchy slices are delicious for any occasion.

In a large bowl, beat eggs, oil, sugar and extracts for about five minutes, until thick and lemon-colored. Combine baking soda and cream of tartar, then mix well with flour in a second bowl.  Add flour mixture to liquid ingredients gradually, first beating and then stirring at the end. (You may not need all the flour.) Fold in the chocolate chips, almonds, and cranberries.  Dough will be sticky.

(If you are using regular baking powder, you may want to refrigerate the dough for several hours or overnight.  But with low sodium leavening ingredients, you need to bake immediately.)

Divide dough into four pieces, lightly flouring your hands if necessary.  Roll each piece into a cylinder and then shape into a flat log that is about 2 by 8 inches.  Place the four logs on two parchment-lined baking sheets.  Sprinkle with sugar.

Bake at 350 degrees for 28 to 30 minutes, until logs are starting to brown. Remove from oven and reduce heat to 300 degrees.

Let cool slightly then cut each log into half-inch slices. Place slices upright on baking sheets and bake for 35 to 45 minutes, turning so cookies bake evenly.  Remove when firm and lightly browned at the edges.  Mandelbrot will become crisper as they cool.  And if they aren’t hard enough, you can always re-bake!

Let cool on the baking sheets.  When cool, store in covered containers.  Makes 40-50, depending on size.