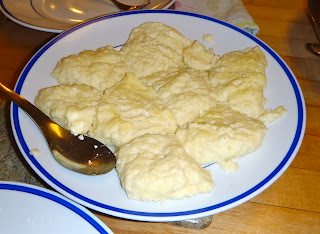 I fell in love with Russian cheese pancakes at a farmers' market and later made a decent version of my own at home.

I was disappointed that Slovenians didn't seem to have their own version of this tasty dish.  The closest approximation was a boiled cheese dumpling, usually served with a topping of buttered breadcrumbs and a little sugar.  So I decided to give Slovenian cheese dumplings a try, to see how they compared.

I found three recipes in my vintage cookbooks.  They showed up under different names (cheese balls, cheese dumplings, sirovi knedeljni, skutovi cmoki) but used the same basic ingredients, in varying proportions. One recipe called for separating the eggs.  Two involved shaping the dough into individual pieces before boiling; one just used a spoon.

One element was common to all three recipes: dry curd cottage cheese. I figured my usual substitute, Russian-style farmer cheese, would do just fine.

I picked the easiest recipe, one from the Progressive Slovene Women.  It was a simple batter dropped from a spoon.  I cut their recipe in half and made one other adaptation: a little nutmeg instead of salt, for a LoSloSo dish.  (It turns out to be virtually the same as my recipe for Russian curd cheese pancakes.) 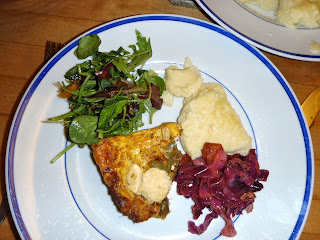 Stir or crumble the cheese.  Add eggs, melted butter, and nutmeg or salt.  Mix well.  Add flour, a tablespoon at a time, to make a thick batter/soft dough.

Bring large pot of water to boil.  Drop in batter by spoonfuls.  Cook for 20 minutes. Remove with slotted spoon.   The traditional topping is buttered bread crumbs, along with some sugar for a sweeter dish.  Dumplings can also be left plain, as I did, to accompany a savory main dish.

The result?  Well, it was mixed.  The batter was almost too loose to hold together in the boiling water.  The finished dumplings seemed puffy and a little waterlogged.  The flavor was definitely bland without the salt.  The next day, the chilled dumplings had deflated and had a better texture, similar to cheese pancakes.

There is no getting around it: I prefer the pancake version, although I do see the advantages of making a fat-free version by boiling.  On the other hand, a non-stick skillet can be used to make the pancakes.

The problem, I suspect, was my substitution of Russian-style farmer cheese for the dry curd cottage cheese.  There are two solutions: drain the cheese first and/or add a little more flour.  That's what I'll do if I try this again. 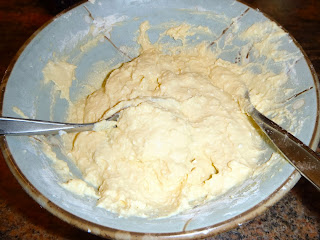 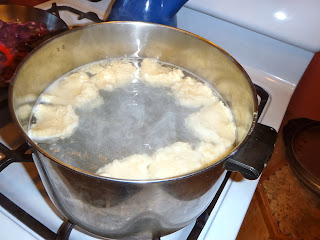 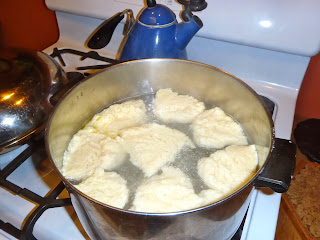