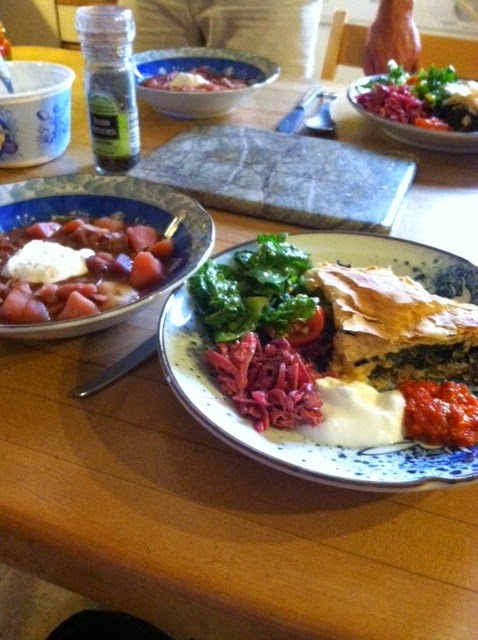 
My first serious cooking after our return from Europe wasn't Slovenian. It was Albanian.

The final stretch of our three-week journey had left a deep impression. We had spent four days in Kosovo, where most people are ethnic Albanian. On a day trip into Albania itself, we enjoyed an extraordinary meal at a Slow Food "farm-to-table" restaurant near a remote mountain village. It was a short but intense time that left me dreaming of mountains and minarets, once we had returned to California. I also missed the family we had left behind in Kosovo: our journalist son and the lovely young woman I could now consider my daughter-in-law.

Even before the trip, I had been curious to experiment with some Albanian cooking, but I hadn't found many resources in English. Now I had more determination--and some time on my hands, since my husband was off visiting his father in Florida for a few days. I resolved to welcome him back with a home-cooked Albanian meal.

After some serious online searching, I found some good resources. The best seemed to be The Frosina Information Network, a Boston-based Albanian cultural organization.  In fact, many of the recipes scattered around the web seemed to be "borrowed" from their recipe section.

I found two recipes that looked promising.  The first was an Albanian-style borscht. The second was a vegetable burek that sounded something like zeljanica, a spinach-cheese pie I had prepared last Christmas.  I already had most of the ingredients on hand.

The recipes below follow Frosina's versions closely.  Along with making half-recipes, I also made a few substitutions, as noted. To see the originals (and for other Albanian recipes) do visit their website.

For the results, read on. 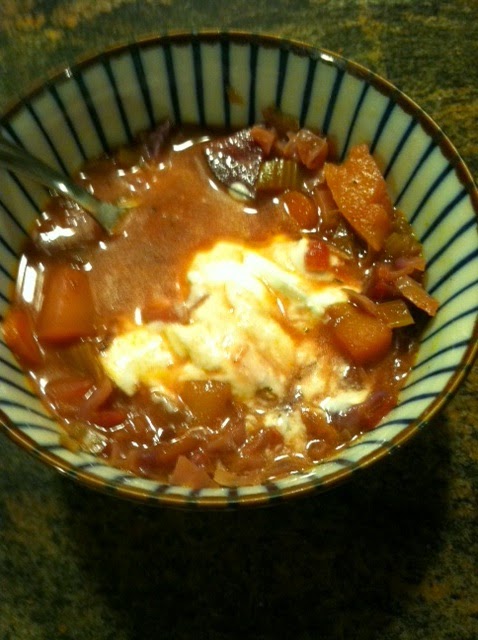 
Brown onions in oil. Add carrots and celery and continue to brown. Add flour and brown, then add catsup or tomato sauce and a little broth, continuing to stir so sauce remains smooth.  Cover and simmer on low heat, then add the rest of broth. Bring to a boil. Add beet and cook 15 minutes. Add potatoes and cook 20 more minutes, or until all vegetables are soft. Add pepper, salt or salt-free seasonings, and (if desired) more vinegar to taste. Serve with Greek yogurt or sour cream. 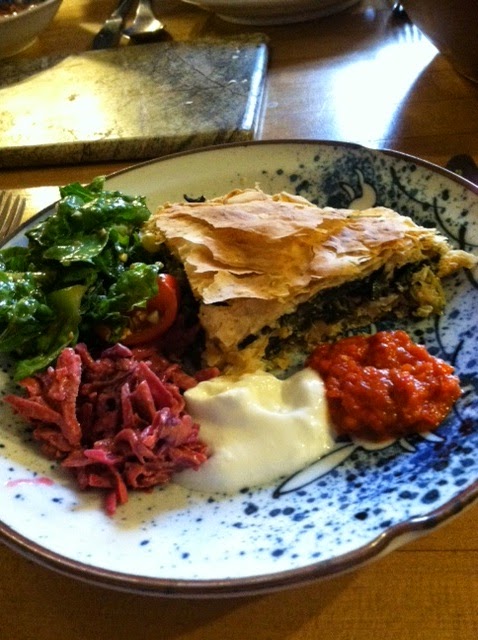 
First, a word about the greens. The Frosina recipe suggests spinach, but I had read elsewhere that other varieties of greens can be used. Since I had a bag of cut, rinsed kale on hand, I decided to use that.

So, to make filling:  Greens should be rinsed well, trimmed, and chopped.  If salt is not a concern, sprinkle the prepared fresh greens with salt and mix well by hand.  (I skipped the salt.) Add remaining filling ingredients and set aside.

Brush an 8 or 9 inch round baking pan with oil. Begin layering filo leaves, two at a time, brushing with oil before adding the next layer. Let leaves extend over edge of pan, in a sort of "fan" pattern. Continue until half the filo is used. Spread filling on top. Cover filling with the remaining pastry leaves.  Roll up the overhanging edges to cover the top.  Brush top with oil.  Bake at 350 degrees for about 45 minutes.
Let cool before cutting.  Serve with Greek yogurt or sour cream. 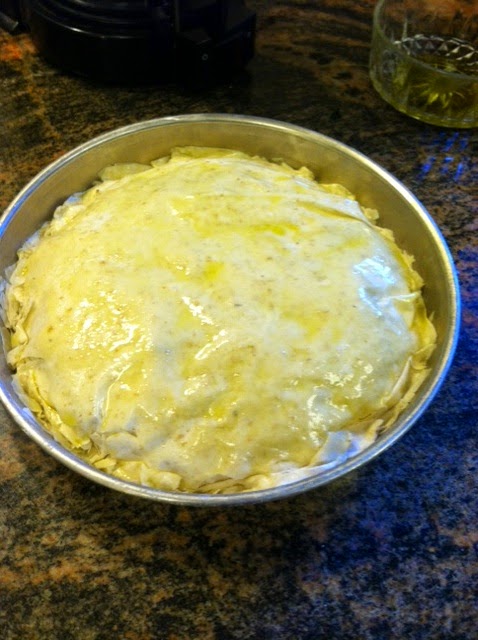 The soup was delicious, with a beet flavor that was less dominant than in the typical borscht. Instead, the brown roux and vinegar gave this Albanian version a subtle, intriguing tang. We both found it a refreshing change.

We also liked the vegetable byrek, which was heavier on the greens and lighter on the cheese and eggs  than the zeljanica I had made at Christmas. The fresh kale, especially without the addition of salt, gave the filling a tough, assertive quality that I thought could use a little softening, although my husband didn't mind it.  The next time, I will probably steam the kale first or go back to using spinach.

All in all, my first outing with Albanian cooking felt like a success! 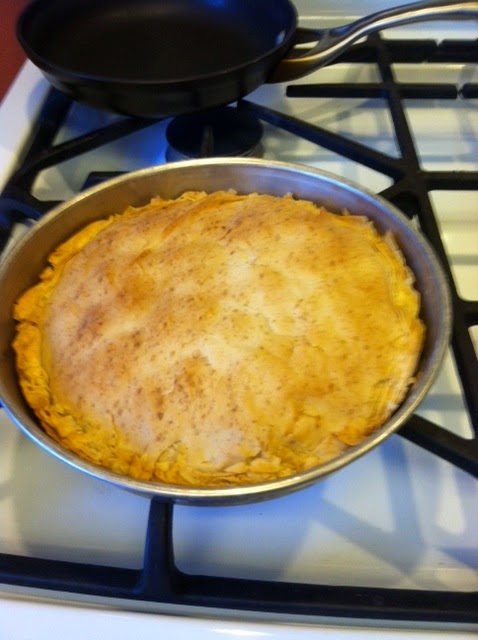