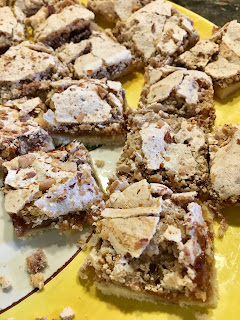 This post is long overdue, although not as belated as my discovery of this new holiday favorite!

Last December, I finally took a chance on Yugoslavian Christmas Cookies, when I found myself with a bare pantry and a few more post-Christmas potluck gatherings to attend. After years of dismissing this recipe as just another sheet pan cookie, I made a surprising discovery. This "cookie" turns out to be a rich pastry, with a shortbread base, a layer of jelly or jam, and a crunchy meringue nut topping. It is elegant, unusual, and easy to prepare for a crowd. It keeps well. In other words, a perfect holiday sweet.

So why had it taken me so long to give it a try?

I'll admit it: I was put off by the name. "Yugoslavian Christmas Cookies"? It sounded so dated--and generic. One more example of that all-too-common vagueness about the people and traditions of southeast Europe. I figured this was just another version of an all-American bar cookie, probably from a Betty Crocker cookbook, with the addition of an exotic name that was supposed to provide a whiff of the mysterious Balkans.

Virtually identical recipes, called Yugoslavian Christmas Cookies--or Jam Bars--or Dream Bars--can be found all over the Internet. The most recent flurry of interest may date from a 2008 recipe for Yugoslavian Squares that appeared in the New York Times Magazine, in an article by noted food writer Amanda Hesser. She was profiling a San Francisco home baker, whose recipe was an adaptation from a 1958 issue of Sunset Magazine. I found an even earlier reference to the same recipe: a 1952 Sunset Magazine publication called "Cooking with a Foreign Accent."

So it is clear that this recipe has been in circulation for more than sixty years. But is it actually rooted in the former Yugoslavia?

I did find near-identical recipes for Yugoslavian Christmas Cookies in two of my vintage Slovenian American cookbooks: a 1981 edition of the classic Pots and Pans, as well as the more obscure Kuharice iz Willarda/ Cooking from Willard (WI), where it is included in the Slovenian recipes section that opens the book. When I turned to a contemporary Slovenian source (Kulinarika), I found just a single recipe for suhi kolači ("dry cakes") that was similar, though without the jelly layer.

A number of online sources provide anecdotal evidence of Yugoslav roots. Sometimes the recipe is attributed to an elderly aunt or a neighbor who came from Croatia, the most common location mentioned. Or Serbia or Bosnia. Or even (once or twice) Slovenia. And then there is this recipe for Yugoslavian Christmas Cookies, which cites a 1987 book by Sharon Herbst, called The Joy of Cookies, where the origins are said to be Croatian or Bosnian and the original name is given as docci bohai or bojai--which turns out to be untranslatable!

So the origins remain a mystery, although the evidence seems strong that it was based on some remembered tradition from the former Yugoslavia. For me, it's enough to know that this recipe shows up in my vintage ethnic cookbooks. Another point in its favor: My Slovenian-born language teacher really liked it!

Update: The consensus on Facebook among members of the Slovenian Genealogy Group: This recipe is not Slovenian in origin, although several people reported Croatian friends or relatives who make it. The funniest discovery: in the Balkans, these pastries are widely known as London Bars ("štanglice Londenske") or simply Londoners! Cream butter and sugar, add egg yolk and salt. Lightly mix in flour to form a crumbly shortbread dough. Pat dough into the bottom of a jelly roll pan (11x16") or a 9 x13" pan. Mix jelly or jam with fork to soften, then spread evenly on dough. Beat egg whites, add sugar and flavoring and beat until stiff, then fold in nuts. Spread meringue layer over dough. Sprinkle with optional nuts. Bake at 350 degrees for 30-40 minutes, depending on size of pan. Cut while warm with a serrated knife. (Don't worry when the meringue shatters--just press it into the jelly layer below!)

Notes: Most recipes call for lemon extract, but I have also used almond extract, which I think has a more subtle flavor. Feel free to vary the quantity of nuts in the meringue (some recipes call for just 1/4 cup) and on top. I prefer the larger jelly roll pan, but have used both sizes.