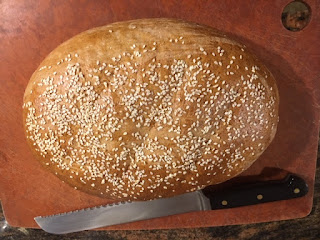 I first made potato bread more than six years ago, toward the end of 2012, my inaugural year of Slovenian cooking. It was part of my quest to recreate the homemade white bread of my grandmother, who never used recipes.

My first attempt, early in that year, had been based on a recipe for white bread ("beli kruh") in one of my vintage Slovenian American cookbooks. The ingredients were standard, although the process was somewhat lengthy: an initial sponge, followed by three more risings. The result was pleasant but ordinary. Nothing like what I remembered.

Toward the end of that year, I decided to try again. I remembered an offhand remark my mother had made: her mother sometimes used potato water in her bread. Maybe that was the secret! I decided to look for Slovenian potato bread recipes and found a promising one, in a recipe collection by a well-known Slovenian American radio personality in Cleveland named Alice Kuhar. She called it "old-fashioned potato bread" or krompirjev kruh. It was pretty good but--as my mother pointed out--it couldn't compare to her mother's. She was right. It was a little dry and almost too airy, with some very large air holes. But at least I was on the right track. 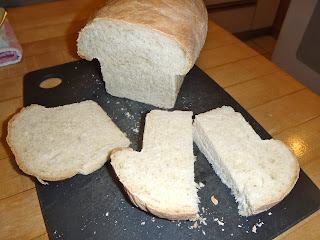 Just after Christmas, I decided to try that old-fashioned potato bread one more time. Ironically, the trigger was the addition of a very high-end appliance to my kitchen: a sleek new KitchenAid. It was my very first stand mixer, a gift from our older son and his girlfriend. I had been secretly wanting one for a few years, although I hadn't told a soul.

But I have to admit it: I was intimidated by that imposing lime green machine. And a little ambivalent, as you can see in the photo below. I worried that it might be cheating to use a big fancy machine for what I thought should be a hands-on experience. But then I reminded myself: Stand mixers have been around for a long time. My mother always had one, even if it wasn't a fancy model. Stand mixers were introduced for home use in 1919, not long after they were adopted by commercial bakeries, so it is possible that even my grandmother had one at some point. The lightweight portable electric mixers actually came later. 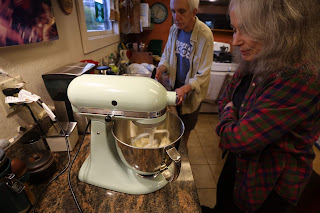 For my maiden voyage with the KitchenAid, I decided to start out with something relatively easy, a quick bread. I ended up with a delectable loaf made with over-ripened holiday gift pears and fresh ginger. Now I was ready to tackle a yeast bread. It seemed like the perfect time to try that potato bread again.

This time, I decide to look at some resources in Slovene. I found many online recipes for krompirjev kruh (potato bread.) Some were virtually identical to the Alice Kuhar recipe I had found five years earlier. Several had interesting twists, like molasses instead of sugar, as one food blogger suggested. I noticed that most of these Slovenian recipes specified a round or oval free form loaf. A few included a sprinkle of sesame seeds on top.

So I used my earlier recipe, cut down by half, as the foundation, with a few changes: A generous addition of molasses. Greek yogurt thinned with a little milk, rather than sour milk. Instead of bread flour, I used my standard all-purpose flour, which is organic and unbleached. (I doubt that my grandmother used special bread flour.) And even though I had warm memories of her crusty rectangular loaves emerging from well-used bread pans, I decided to forego that in favor of a hand-formed round with sesame seeds on top.

Once I got past the intimidation factor, I discovered the magic of the stand mixer, especially when it includes a dough hook. With the KitchenAid, the whole process was faster, neater, and easier to manage, especially with a slightly sticky dough like this one. And even with a fancy mixer, bread making still requires a certain amount of satisfying hand-kneading and shaping.

On to the real question: How did this new potato bread turn out?

Maybe it was the changes to the recipe. Or maybe it was that new stand mixer. But the third time was definitely the charm. The potato bread was delicious! This time, it had a more even crumb, with a texture that was both velvety and substantial. If I closed my eyes, I could even imagine I was eating my grandmother's white bread, instead of the light tan loaf I had crafted.

I was sorry that I could no longer offer my mother a taste and ask her to weigh in. She died almost a year ago. It seems fitting that I am posting this recipe today, on February 1st. Her birthday.

I think she would have liked this latest attempt, although I am sure she would remind me that my grandmother's famous white bread was never darkened with even the faintest tinge of molasses, no matter how tasty it might be.

Now it occurs to me what the final step in this bread journey will be: Making this recipe with honey. That would retain the satisfying moist texture and slight sweetness, while restoring the familiar white color of my grandma's famous homemade bread.

Peel and cube the potato and cook in boiling water in covered pot until tender. Without draining, mash the potato pieces in the cooking water.  Measure the mixture, adding more water if necessary so that the total amount comes to about 7/8 cup.

Put the mashed potato-water mixture back in the pot, along with the thinned yogurt, molasses, butter, and salt. Combine ingredients until butter is melted.  Heat or cool to allow mixture to reach 120-130 degrees--or warm but not hot.

Combine yeast with 1 cup of the flour in large mixing bowl. When the potato mixture is the proper temperature, add it to the bowl. Beat with electric mixer at low speed for 30 seconds.  Scrape bowl to make sure mixture is well combined.  Beat at high speed for 3 minutes.  Stir in as much of the remaining flour as you can with a large spoon. Then turn the mixture onto floured surface and begin kneading in the rest of the flour.

According to the recipe, you should knead in enough flour to "make a moderately stiff dough that is smooth and elastic," a process that should take 6 to 8 minutes.  Form the dough into a ball.  Place it in a large oiled bowl, turning over to oil the top. Cover and let sit in a warm place for  45-60 minutes, or until doubled.

Punch dough down. Turn out onto floured surface and knead briefly. Cover and let rest for 10 minutes.

Form the dough into a round, brush with egg white and sprinkle with sesame seeds. Let rise again in a warm place until almost doubled.

Note: Although these directions are based on old-fashioned hand-kneading, I did use my new stand mixer to make this version of potato bread. It worked beautifully! If you do use a stand mixer, follow the manufacturer's instructions for the proper attachment use, mixer speed, and timing. Low speed and shorter kneading times are usually the rule. Good luck!