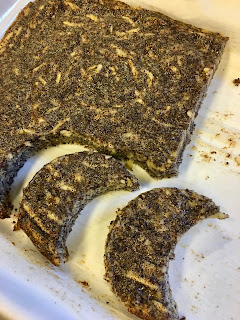 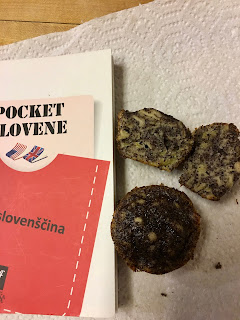 I first tasted this unusual sweet last May, at a party at San Francisco's Slovenian Hall. It was the end-of-the-year celebration for our Slovenian language class. And also, as it would turn out, the last year of study with our much-loved teacher Mia Rode.

For the class potluck, I prepared a tasty "grade A potato salad" with a recipe for krompirjeva solata from our textbook. But the most intriguing contribution came from a young Slovenian man who was engaged to one of my classmates. She proudly passed around a pan of dark moist squares that looked just like American brownies. My classmate shared her fiancé's secret: The only chocolate was in the frosting. The cake itself was made of apples and poppy seeds. "You'll hardly notice," she assured us.

Since I happen to love poppy seeds, I was relieved that I did notice that familiar musky flavor as soon as I bit into one of the squares. The rich chocolate frosting wasn't even necessary. If anything, it was a distraction from this delicious and unusual cake.

A few days later, I went searching for a recipe. I hadn't even thought to ask my classmate what this unusual dish was called. For that matter, I wasn't even positive it was Slovenian in origin.

I found two examples online that seemed similar to what I had tasted at the Slovenian Hall. The first turned up on a YouTube cooking channel belonging to a Hungarian woman named Magdi. She cheerfully demonstrated a dish she called "easy poppy seed apple cake." By searching Kulinarika, the Slovenian language cooking website, I discovered a similar sweet, with a long name that translated roughly as "juicy little moons with poppy seeds (or walnuts)."

The two recipes called for similar ingredients: flour, sugar, apples, poppy seeds, eggs, and oil. The only real difference was that the Slovenian version used more eggs and apples, while the Hungarian recipe added sour cream, along with a little rum and lemon rind. The Slovenian recipe was also a more elaborate in the preparation and presentation: Separated eggs, a chocolate frosting, and little cut-out crescent shapes instead of squares. 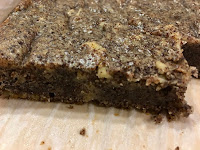 Both recipes used a cooking gimmick that seems to have caught on lately: Using identical measures (or multiples) of most of the key ingredients. For the Hungarian woman, the magic number was one. One cup of each dry ingredient, 1 cup of sour cream, 1 egg, 1 apple, and so on.

The Slovenian recipe also used 1's. But there was a catch. The measuring unit of choice was a  jogurtov kozarec (j.k.). A yogurt glass.

It appears that simple cake recipes based on yogurt containers are something of a fad, in Europe and beyond. Does anyone worry about the size of these containers? Eight ounces used to be standard in the US, but imported yogurt cups are usually smaller. And the proportion idea breaks down when it comes to counting up the apples and eggs.

The first time around, I decided to sidestep that tricky yogurt cup measure in favor of Magdi's more straightforward video recipe, presented in English, with familiar American measures and a casual "one bowl" mixing technique. It was good. And easy. I did like the Slovenian idea of little individual cakes, so I baked part of the batch in mini muffin tins. 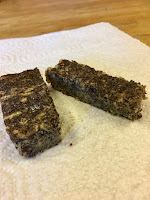 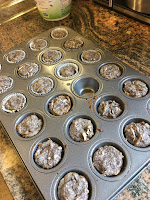 But I still wanted to try that Slovenian recipe. I was happy to do the translation and the measurement conversions, but I needed some guidance with the yogurt cup problem. So I posed the question to the Slovenian Genealogy Group on Facebook, who are pretty tolerant of cooking questions. How much is a yogurt cup or glass, to a European cook? Their answer: 180-200 ml, which translates into a generous 3/4 cup. 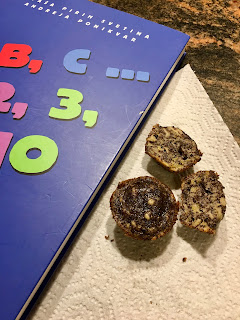 I have made that Slovenian "yogurt cup" recipe three times now. It is a forgiving formula that always turns out well. It also keeps well.

Most recently, I served these intriguing little cakes to the small alumni group from the Slovenian Hall language classes that is now gathering regularly at my house in Berkeley. Mia Rode, our teacher for many years, is now an instructor at Stanford, where she is offering their first-ever Slovenian language classes. We are fortunate to have a new guide, a lovely woman named Miriam, also born in Slovenia, who is trying to help steer us in the direction of relaxed and confident conversation.

The recipe below follows the Slovenian recipe, with a few flavoring options from the Hungarian version that I have sometimes used. I have never tried the walnut version. And I really do prefer to leave the cakes unfrosted. Why gild the lily? 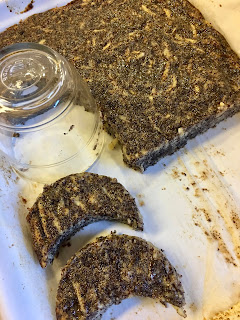 Adapted from a Kulinarica "yogurt glass" recipe for Lunice, or little moon cakes.

Frosting: chocolate, margarine, milk. (No further directions given in the original. Consider it optional!)


Although the original Slovenian recipe does not specify ground poppy seeds, many other recipes--including the Hungarian one--do. Most cooks believe this improves the flavor and texture. You may be able to purchase ground poppy seeds, but it is easy--and fresher--to do it yourself with a coffee mill. If you need instructions, go here.

Beat the egg whites and add sugar, beating until glossy. Add the egg yolks and oil and mix. Combine flour and baking powder and fold in, along with the poppy seeds. Gently fold in apples. Pour batter into 1 or 2 oiled rectangular pans or, if desired, a mini muffin pan. Bake at 350 degrees for 15 minutes for muffins, 25-30 minutes for a larger cake.

When the cake cools, cut into squares. Or, to make pretty little moons, use a drinking glass to cut into crescent shapes, as in the photo above.

The original recipe calls for a chocolate frosting but I think it tastes better without.

You can substitute ground walnuts for poppy seeds--but why bother?