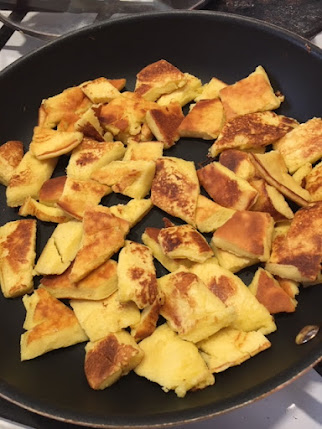 Šmoren at home
The second meal I made for my 2012 year of ethnic cooking was a breakfast dish and a new discovery: Šmoren. It sounded like a cross between a big pancake and an omelet that gets chopped and stirred into bits.
That first attempt turned out to be an eggy treat I quite liked, partly because the batter could also be used to make crêpes, otherwise known as palačinke in Slovenia. (Also known in my childhood as jelly rolls.) I went on to try a less eggy recipe. I also came up with a buckwheat version. They were all good.
In honor of the 10th anniversary of my year-long cooking adventure, I decided to try one more šmoren recipe from a classic cookbook I acquired more recently: Pots and Pans, the SUA's first update to their venerable Woman's Glory.
That recipe seemed to have less milk than the other versions I had seen. It was the closest yet to a conventional American pancake in taste and texture, which might have been less appealing--except for one thing. It closely resembled the šmoren I had finally tasted on our last trip to Slovenia.
We had wandered one day into a food festival in the Ljubljana farmers' market and discovered classic Slovenian dishes being prepared on a large scale. I was fascinated when I saw a young man preparing šmoren in the largest frying pan I had ever seen! When we bought a serving to share, my first thought was that it seemed just like a big chopped up American pancake.
So maybe this is the authentic Slovenian way. If you would like to try it, just follow the recipe below. 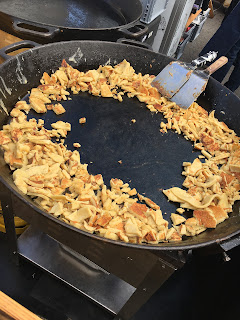 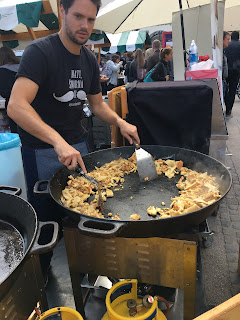 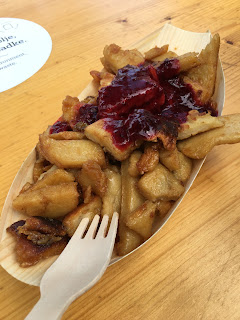 Šmoren  (from Pots and Pans)
4 large eggs, well beaten
1 cup flour
1/4 teaspoon salt
1/2 teaspoon baking powder
1/2 cup milk
4 tablespoons hot fat (lard preferred)
Beat eggs, gradually add the flour mixed with dry ingredients. Add milk and beat until smooth.  Heat fat or oil in ten inch skillet. Pour in entire mixture, cover, let fry until edges start to roll. Break into large pieces and turn. Keep turning into all edges are brown.
The original recipe suggests serving with a salad or topping with pork cracklings or sour cream. I would be inclined to stick with fruit and sweet toppings like honey and jam. I would  also skip the lard and use a smaller quantity of oil or butter for frying.
Posted by Blair K. at 6:42 AM