Portrait of a Family in Transition: The 1940 Census 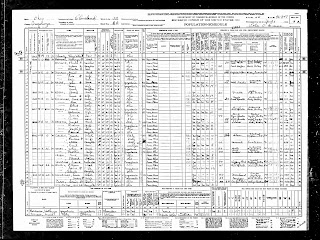 I don't have many images of my mother's family from the early days in Cleveland.

There is this one: 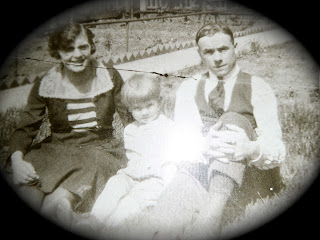 It shows my grandparents and their first child, my uncle, in about 1920.  My grandfather, who had left Slovenia as a teenage orphan in 1911, is in his mid-twenties.  My grandmother is still a teenager.  She had a fourth grade education.  He probably had less than that.  At home, they spoke only Slovenian.

There there is this one, from the late 1920s.  The family had grown to include my mother. By now, they spoke English at home.

But now I have a newer picture.  It's the image you can see at the top.

It's only words and numbers, so you have to use your imagination. It's an image from the newly released 1940 United States Census.  Big news, at least for genealogy fanatics.

My mother's family is at the very bottom.  They continue on to the next page.  If you magnify the image, you will find them, in a multi-family building on East 160th Street in Cleveland. My grandparents, Louis and Mary Kozlevcar.  Their four children.  My immigrant great-grandmother, Josephine Strukel Adamic.  She never did learn to speak English.

The family moved around a lot.  But they always stayed in the Collinwood neighborhood.  It was like a Slovenian village.  I know that first hand, after poring over hundreds of names and more than fifty images like the one at the top of the page, before I found my mother and her family.

The 1940 Census hasn't yet been indexed.  So for those who can't wait, the only alternative is to search the images.  It's like finding the needle in the proverbial haystack, even when you have identified the right census enumeration district.  Even doing that is challenging, since often you aren't sure of your ancestors' address in 1940.

I had a couple of possible locations for my family,  from 1938 and 1942.   I confirmed their 1940 address in a surprising way.  It turned up in a Google search, in a Slovenian language newspaper from Cleveland called Ameriška Domovina.  American Home.

It was a short item, dated January 1940,  about my uncle, that little blonde boy in the first photo.  He was one of only three college students from Cleveland to be included in the 1940 edition of Who's Who in American College Students.  The article listed the family at an East 160th Street address. His name was given in two ways: Kozlevcar, and then the new Americanized surname he had adopted.

It was the same thing on the census listing.  The oldest son, away at college with a new name.  The parents and the other kids at home in Cleveland, with the old name. Eventually, my mother and her two younger siblings would all make the same change. College and a new name. Becoming American. Sometimes it comes at a cost.

But the article in that Slovenian language newspaper made no judgement about how "one of their own" might define success.  Their were proud of their "diligent boy."  He had a scholarship to cover tuition, but he worked on campus to pay for room and board.  He enjoyed using his talents and considered perseverence the path to success.  He expected to graduate in June.

I keep trying to understand my family's past.  Yesterday, it was census research.  Today is Tuesday, so it's a different path.  On to Slovenian Dinner #15.  But I'll be remembering them all.

I am very grateful to my online friend DR, a professor in Slovenia, who translated the passage about my uncle from Ameriška Domovina.   For anyone who would like to see the original, here it is: