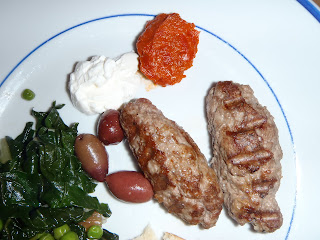 
Cevapcici (chuh-VAP-chee-chee) are a wildly popular street food in the Balkans.

It’s a simple dish, in theory. A mixture of ground meats, seasoned and rolled into little sausage shapes, and then grilled.  The dish probably originated in Turkey. The name, according to some sources, means "little kebabs."

These days, you can find cevapcici in many cities in America, if you look in the right neighborhoods.

I first tasted cevapcici in Bosnia, in the spring of  2006.

I was sitting with my husband and my in-laws at an outdoor cafe on the cobbled streets of the Old City of Mostar.  We had just crossed the famous old bridge, Stari Most, built by the Ottomans in the 16th century.  It had been destroyed during the Balkan wars of the 1990s and then rebuilt, to much international fanfare, in 2004.

We had walked over the graceful arch and stopped to watched the young men dive into the river for tips.  We browsed in the open air market.  I hadn't yet been to the Middle East, but that's what it felt like.

That day, for the first time in my life, I heard a muezzin's call.  In the space of ten minutes, I saw a mosque, a Serbian Orthodox church, a Roman Catholic church, and an old Jewish synagogue.  So close together.  And now so far apart.

Our tour guide was a beautiful, articulate young woman.  Mostar used to be a cosmopolitan city, she told us.  Her family, like so many others, included many mixed marriages.  People got along, most of the time.  She was close to tears, as she told us about her lost city.   Restored but now divided.

We were at the midpoint of our first trip to Eastern Europe.  We had started in Vienna, spent two wonderful days in Slovenia, and then moved on to Croatia.  But now,  here in Mostar, I understood the failed Yugoslav experiment in a deeper way.  I had a fuller vision of the Balkans, with all the richness and the sadness.

The details of that first taste of cevapcici are hard to recall.  I was trying to absorb so much, and food was the least of it.  But I think it was like this: Charred, spicy meat. Fresh pita.  Raw onions and the red pepper relish I would later learn to call by its proper name, ajvar. The sweet, cool relief of thickened yogurt.

Now, six years later, I had this crazy thought:  why not make cevapcici myself, as part of my Slovenian cooking project?  I knew the dish was popular in Slovenia, at least these days.  But then I reminded myself: I had to follow my own rules. I would stick to recipes from my 1950s ethnic cookbooks.

I didn't expect to find cevapcici recipes in my vintage cookbook collection.  The American Slovenian community in the 1950s would have been too insular, I figured, to know anything about a Serbian-Bosnian dish.  But I checked my cookbooks to be sure.  To my surprise, I found two recipes for cevapcici.  A little digging turned up a history that goes back to the 1930s, when cevapcici appeared on one of Slovenia's first outdoor food trucks.  The vendor hailed from Serbia.


So now I had a plan for my Week Nine dinner: Cevapcici and Homemade Bread.


There are as many approaches to cevapcici as there are cooks. I began with the simple version offered by the Progressive Slovene Women:  a mix of lamb and pork, seasoned with salt and pepper. Contemporary sources suggested livelier seasonings, along with the addition of baking soda or soda water to lighten the meat mix.  So I modified the original Slovenian recipe, while retaining the suggested meat combination.

The meat mixture, just like the seasonings, can vary. That other Slovenian recipe used veal. In Balkan communities with a predominantly Muslim population, like Bosnia and Kosovo, pork would not usually be included, but beef would be a common addition.  Next time, I thought, ground turkey might be worth a try.  (Instead, for my encore version a month later, I used a beef and lamb combination and increased the spices, along with making smaller, thinner shapes.  The result, I think, was closer to the dish's origins.)

The beauty of this dish is that the cook is free to adjust and experiment.

Here is my first version: 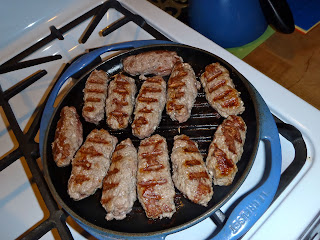 Mix all the above ingredients lightly. Refrigerate for a half hour to allow flavors to meld. Form into 12 small sausage shapes, about 3/4" by 3".

Grill until nicely charred.  My husband, who did the honors, used his Le Creuset stove top grill pan, which worked beautifully.