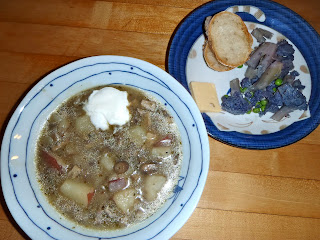 My husband and I had come back from our trip to the east coast two days earlier, both of us sick with the flu. Could I really cook a Slovenian dinner today?  I barely felt like eating.

In the refrigerator,  I found a covered dish with a small portion of stuffed peppers, the entree from the dinner I'd made two weeks earlier.  My husband must have taken it out of the freezer to defrost before he left for work.  How sweet, I thought.  He knew it was Tuesday, our Slovenian dinner day, but he didn't want me to have to cook.

Maybe I would make something easy and light, as a side dish.  I started browsing soup recipes in my vintage cookbooks and found a few for mushroom soup.  Perfect.  And I knew Slovenians were fond of mushrooms.  My immigrant grandfather used to gather them. I headed to the big produce market around the corner.

At the market, I felt a little overwhelmed by all the exotic mushroom choices. 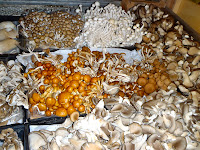 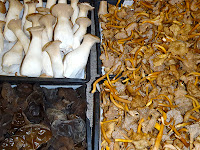 I do like mushrooms, but I tend to be cautious when I'm doing the cooking.  I usually stick to plain old white button mushrooms.  Some of the recipes even suggested adding dried mushrooms, to boost the flavor.  But I wasn't feeling that adventurous.

I decided to try those nice brown Crimini mushrooms.  A step up, but not too daring. 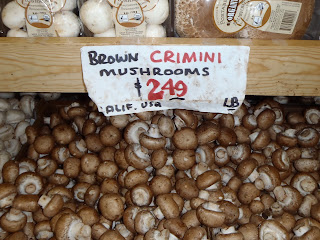 I was in the middle of making the soup, guided by the Progressive Slovene Women of America, when my husband got home from work.

"Hey, thanks for taking the stuffed peppers out to defrost," I said.  "That was a real help."

He gave me a blank look.  "What stuffed peppers?"

Oops.  Evidently they had been languishing at the back of the refrigerator for the past two weeks.

So I quickly adopted Plan B.  I zipped around the corner to pick up a French baguette from the bakery, while my husband cooked the broccoli I'd bought.  We had cheese and salami on hand to round out the meal.

The soup was nice and light.  But very flavorful, even without the broth my husband had hinted I might want to add.

Those crimini mushrooms had definitely provided a flavor boost.

Maybe next time I'll be even more daring.


Cook potatoes in salted water until tender.  Set aside but do not drain. Clean and chop mushrooms, pour boiling water over them, drain, and set aside.  Heat oil, add flour, and brown to make a medium roux. Add garlic, onion, and parsley and brown.  Add mushrooms, cover, and cook for 10 minutes.  Add potatoes and cooking liquid, bay leaf, and seasonings.  Cook for 10 minutes or until done, adding more liquid if needed.  Serve with sour cream or yogurt.