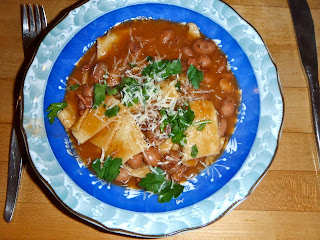 
Finally, I had a clearer picture of my grandmother's elusive Mystery Bean Soup.  It was a Roman bean and pasta soup, made with square noodles.  In my mother's family, the Slovenian name for those noodles, bleki, had become the name for the soup itself.

I couldn't find anything like this in my trio of vintage Slovenian American cookbooks.  But an online search turned up a handful of recipes for Slovenian pasta and bean soup, or pašta fižol.  So this looked like another recipe the Slovenians had adapted from their Italian neighbors.

I found a recipe on the official Slovenian Tourist Board website, here.  It served as a good guide, although much was left to the imagination.  The type of beans, the style of pasta, and the quantities of seasonings were unspecified.  The photo seemed to show red kidney beans and commercially made macaroni elbows.  In a delightful American blog called Soupsong, I found an almost identical recipe here,  which specified kidney beans and small pasta shapes.  It also spelled out the cooking method a little more clearly.

My first task was to find those Roman beans, also known as borlotti beans or cranberry beans.  They can be hard to track down.  But I found them in the special "heirloom bean" section of our local organic produce market in Berkeley.  Turkey bacon seemed like a good substitute for pancetta.

The pasta, of course, would be homemade bleki.  This turned out to be an easy enough task, using the same the egg noodle recipe from last week's dinner.  But I figure bleki deserves a separate post, since it was so central to this dinner!


Soak the beans overnight in water to cover.  Drain, cover with fresh water, and simmer until tender, 30-60 minutes.   Do not drain.  Set aside.

In a separate pot, boil the bleki (or other pasta) in salted water until barely done.  Drain, rinse in cold water, coat with a little oil, and set aside.

Add the sauce to the undrained beans.  Add the bleki or pasta and seasonings.  Bring to a boil, cook for about 15 minutes or until thick.  Add salt and vinegar to taste.  Garnish with parsley to serve. 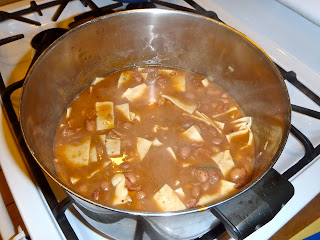 The verdict?  Delicious!  And it was brought to a whole other level by the homemade bleki.

Was this really the Mystery Soup my mother recalled so fondly?   I'm not sure.   Next time, I might try making a separate brown roux with the flour and oil, and then add it.

And maybe I should have pureed the beans.  Here is the very brief bean soup recipe from another Slovenian tourist site:

"First, you puree the beans, thicken with roux, and boil home-made noodles, bleki (noodle dough squares), or other pasta."

Maybe I'll try it again that way, before I risk a "black-eh" taste test with my mother!


Update:  Using the guidelines above, I did make a final attempt to create my mother's "black-eh."
To find out how it turned out, go here!