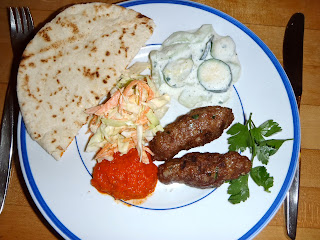 It was a busy Tuesday in early April.  I was finishing up the final edits on my Slovenian cooking article for Kosovo 2.0.   And this week I had a special cooking challenge. A few days earlier, we'd learned about a couple of out-of-town visitors, who were due to arrive sometime tonight.

In other words: Dinner guests, on my Slovenian cooking day.  For the first time.

So far, my ethnic cooking had been a private experiment.  I didn't want to miss a week, but  I wasn't sure I was ready to share it with outsiders.

I thought back to a little pep talk I'd read in my vintage copy of Woman's Glory: The Kitchen, at the beginning of the "potica" chapter.

"If  your potica is made correctly in every respect," the authors wrote, "you should not hesitate to offer it to your American friends."  In their own experience, they added, potica had "always been well received."

Last year, when I first read those words, I laughed.  I felt sorry for those insecure cookbook authors, afraid that their ethnic heritage might be dismissed by "real" Americans.  How sad that the leaders of the Slovenian Women's Union even sounded anxious about Slovenia's most delectable dish.

But now I wasn't laughing.

Three months into my cooking project, something had changed.  Now I felt an unexpected kinship to those 1950s homemakers.  Just like them, I felt protective (and a little insecure) when I thought about sharing our Slovenian food with outsiders.

I had developed a feeling of pride and ownership for this culture that I barely knew before.

What to make? The recipe had to be reliable, tasty, a bit unusual, but not too odd.  I wanted to make something that would please our guests, an old friend and his teenage daughter, who were considering a college admission offer she had just received from UC-Berkeley.

Yesterday, I  had figured it out: Cevapcici.  It had been a real success, when I made it the first time, a month ago.

My husband was surprised.  "Are you allowed to repeat the same dish?"

At first, I thought he was teasing me.  But he was serious.

I assured him that it would be all right.  I would just change the ingredients a little.  I had already planned on experimenting with the meat mixture and the seasonings.  And a Facebook friend from Slovenia, when he viewed the photo I had posted, suggested that the shape needed to be a little longer and skinnier.

So that's what I did.    I mixed lamb with beef instead of pork, this time around.  And I increased the spices.

For more background about cevapcici and my first version of the dish, go to my earlier post, here.


Here is the new "fit for company" encore version: 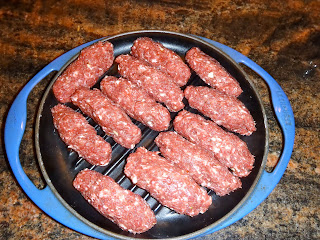 Once again, my husband did a beautiful job with the his Le Creuset stovetop griddle: 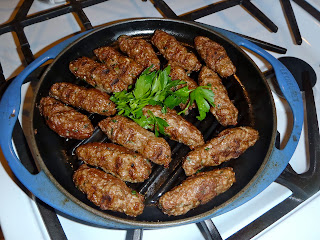 We served the cevapcici with the store-bought pita, ajvar, coleslaw, and a nice salad of cucumber, zucchini, sour cream, and yogurt.

This verdict? Delicious!  I liked the increased spices.  The cevapcici did seem a little drier this time, maybe because I used lean ground beef instead of pork.  Or perhaps they cooked faster, because of the thinner shape.   Overall, my second attempt at cevapcici seemed closer to the dish's Serbian-Bosnian origins.

Our guests didn't arrive until late at night.  They were very happy to have such tasty and exotic leftovers!