Slovenian Dinner Week 25: A Grilled Meatball from The Yugoslav Cookbook of 1985 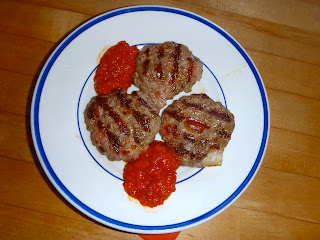 It was the first Tuesday in July, the halfway point in my year of cooking ethnically.  The following day was July 4th, Independence Day in the United States.

I hoped to figure out a dish for tonight's dinner that would also work at the neighborhood Fourth of July cookout.  As usual, each family would bring its own meat to grill, along with another dish for the communal potluck.

Cevapcici would have been an ideal choice, but I wanted to branch out.  So I turned to a new source I had just added to my cooking library:  The Yugoslav Cookbook by Olga Novak-Markovic, issued in 1985 by a publisher in Ljubljana, now the capital of Slovenia.

This once-glossy cookbook wasn't quite as “vintage” as my trio of Slovenian American cookbooks from the 1950s.  But it was an historical document in another way: it was an artifact from the final  years of Yugoslavia's existence.  That multi-ethnic country began to unravel just a few years later.  The first of the constituent republics to break away was Slovenia, during a ten day war for independence in June and July of 1991.

Months earlier, I had borrowed the book from the library of the Slovenian Hall in San Francisco.  A few weeks ago, I had located a copy of the hard-to-find volume for sale through an online bookseller, so I snapped it up.

The English language edition was a joint venture of the original Slovenian publishing house and a British company.  The author was a Slovenian woman.  Although the dishes were chosen to reflect the diversity of food from all the republics of Yugoslavia, the book did appear to have something of a Slovenian focus.

Sometimes the origins of a recipe were noted, and sometimes not. So for me, picking out the Slovenian dishes was a guessing game.  But I had already decided that I would not be a purist in that regard.

Besides, there was a whole section devoted to grilled and barbecued dishes.

I found the recipe for meatballs with cheese, or uštipci, right under čevapčiči. The two dishes looked very similar.  I suspected that they must share the same “oriental influence,” as the cookbook author quaintly put it in the preface, in describing the dishes from Macedonia, Serbia, Bosnia, and Kosovo.

Ustipči seemed to be cevapcici with a few twists: a meatball shape, a little bacon, and kačkavalj, described as “a hard, fatty sheep's cheese.”  I assumed it must be the same as  kashkaval, which I could probably find at our local cheese market.

Assuming I did the metric conversions right, the ingredients below follow the original. 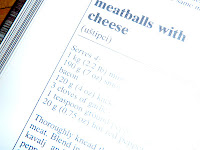 Mix all the ingredients well. Shape into walnut-sized balls.  Refrigerate, as I did, or grill immediately.

The verdict:  Mixed.  The sides were just fine.  But the meatballs didn't work.  They didn't hold together the first time my husband grilled them.  The second time, he reshaped them into patties, which did work a little better.  But the flavor and texture continued to be odd.

The ingredients just didn't fit together.

I had used a thick, uncured bacon from the butcher shop on the corner, diced into squares that were about 1 cm in size.  Those squares looked pretty prominent when I mixed up the meatballs.  I wondered how the fattier bits would crisp up.  Well, they didn't. They didn't cook well at all, especially the ones on the inside.  It was disconcerting to bite into prominent, firm pieces of bacon fat. 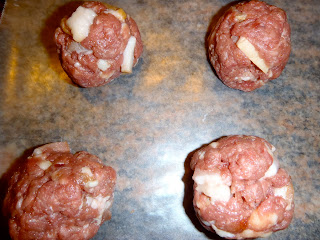 The solution might be to use ordinary thin bacon and mince it.  A less fatty cut would also help.

We froze some of the uncooked meatballs.  A month later, I defrosted them, crumbled them up, and used the meat mixture to make a tomato sauce for polenta.  Once liberated, the bacon pieces cooked much better.  (I did pick out some of the tougher fatty bits and discard them.)  The result was was a pleasant tomato-meat sauce with an interesting tang.

Some ingredients are more harmonious when they aren't bound too closely together.

I think this lesson had to do with more than just cooking. 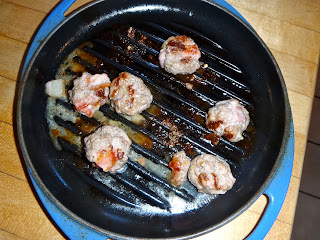