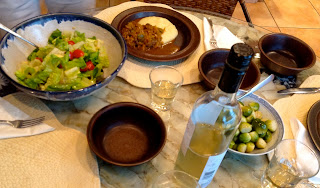 
It was a Monday in late June, on what would have been Week 24 of my Slovenian cooking project. For the second time in three months, we were in Florida, staying at the home of my husband's father and stepmother. But this was a bittersweet time, because our unplanned trip had been triggered by the death of my husband's mother.

My father-in-law's birthday had been the previous day.  There hadn't been a celebration. But today, my husband and I wanted to do something to observe his special day.  We offered to make a belated birthday dinner.

"I could make a Slovenian dinner," I said hesitantly.

I was more than willing to cook.  As I had learned the previous week, during sad times it can be a relief to perform a concrete, useful task--like feeding other people.

But I wasn't sure how my offer would be received.  My father-in-law is a fine cook who didn't start to slow down until he passed eighty.  During our spring visit, he had shared his special recipe for kreplach, a traditional Jewish dumpling with a strong resemblance to Slovenian žlikrofi.

He is a man of strong opinions about food (and most other things).  So it wasn't a surprise when he didn't immediately embrace the idea of a Slovenian dinner.

He asked what I had in mind.

Goulash, I suggested.  Slovenian-style, made with sauerkraut.

My father-in-law seemed puzzled but intrigued.  He had never tasted anything like that, he admitted.

My husband thought it was a fine idea.  His stepmother agreed.   She took us shopping.

When we got back, my husband and I took over the kitchen.

I followed the same goulash recipe I had used for my Week 4 Dinner, with a few small changes. I used skirt steak, a better cut of meat,  because it was already on hand.  This time, I used green pepper, as the original recipe suggested, instead of red pepper.  To enrich the flavor, we added some white wine toward the end of the cooking period.

We served the goulash on soft polenta, along with a green salad and some nicely cooked brussels sprouts, courtesy of my husband.

Instead of birthday cake, I put together strawberry shortcake with freshly whipped cream.

The goulash worked out well.  If anything, the changes made it even better, this time around.

My father-in-law liked it, too.  And he's not one to mince words, in or out of the kitchen. 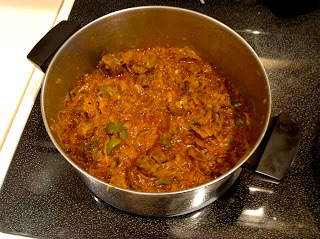