Slovenian Dinner Week 27: A Cevapcici Dinner for A Friend; Discovering the New Normal 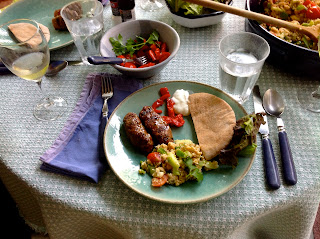 
This was another dinner for a sad time.

We were on the East Coast for a memorial gathering to honor a dear old friend.  He had died six weeks earlier, after months of declining health.  We were staying in the home he had shared with his wife, also a close friend of ours.

On the last day of our visit, a Monday, we offered to make dinner for her.  Perhaps something Slovenian?

Once again, cevapcici seemed like a good choice.  To accompany it, I decided to make kasha Mediterranean salad, an unusual dish that was the creation of a Slovenian-American Facebook friend named Josef.

It seemed like an ideal warm weather dinner.  Everything could be made in advance, and the cevapcici could be prepared on the outdoor grill our friend often used. 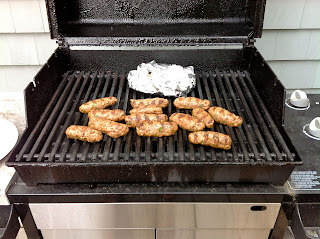 We went to the modest grocery store in her small New England town and had a few challenges. There was no ground lamb available, but the store's butcher eventually agreed to grind up a package of  lamb stew meat we selected.  We managed to find pita and Greek yogurt, but no ajvar.  We couldn't find kasha (buckwheat groats) for the salad, so I bought the next best thing, whole wheat couscous.

The cevapcici was a combination of my two previous recipes. The meat mixture was almost identical to the first version.  But the seasonings were more like the second version, which I had spiced up for company.

Mix all ingredients lightly.  Form into  thin sausage shapes and let sit for an hour or more before grilling.


The Mediterranean Salad worked out fine without the kasha, athough it did seem more ordinary with the familiar couscous.  Fortunately, I did have the two other elements my Facebook friend included as a reflection of his Slovenian heritage: chickpeas and paprika.  I mixed in feta cheese, tomatoes, assorted green vegetables, along with fresh parsley and mint from the garden.  After marinating for a few hours in a tart vinaigrette dressing, the salad had a nice tang.  (To see a recipe for the proper version, which I made after I returned home, go here.) 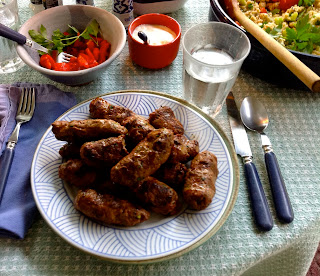 Our friend grilled the cevapcici herself. She seemed to enjoy the meal, although food wasn't really the point.

The memorial gathering was over.  She was entering a new phase of her life. Her children had left earlier that day.  We would be leaving the following morning.  But not together, because my husband had to take the train to Boston for a work-related conference, where he would spend the remainder of the week.  I would make the long flight back to California alone.

So it was a bittersweet farewell dinner.

Tuesday morning, I set out for the airport with a nice cevapcici lunch our friend had packed from the dinner leftovers.  I was touched that she wanted to take care of me, when it was supposed to be the other way around.

When I got home on Tuesday night, after twelve hours in transit,  I was in the mood for something easy  and soothing. So I made myself some šmoren, the simple nursery favorite I had discovered back in January, at the very beginning of my Slovenian cooking project.  I found some strawberries in the refrigerator to go along with the sweet eggy crumbles.  And I opened the bottle of white wine my husband had left in the refrigerator for me.

Wednesday morning, I defrosted the leftover uštipci from our Week 25 dinner.  When I got home from work in the evening, I transformed those peculiar meatballs into a sauce for polenta.  I made a green salad and poured myself a glass of wine.

By Friday, I figured it was time for a change.  So I prepared a salad with some white beans and canned tuna we had in the pantry.  It was probably Italian-inspired more than Slovenian. My husband would be getting home very late that night, and I thought it might be a dish he would enjoy.

That's when it hit me. Slovenian food was no longer an interesting project.  Not just a weekly experiment. It had become comfort food.  A way to take care of myself and other people.  Natural. A part of me.

I could have kept on eating it, night after night.