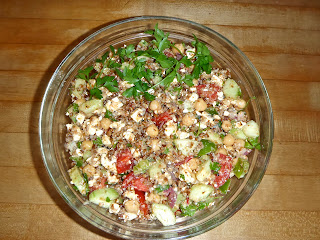 This unusual dish was the creation of a Slovenian American Facebook friend named Josef. He took a familiar Mediterranean pasta salad as the foundation and then added some twists to reflect his Slovenian heritage.  He calls it Kasha Mediterranean.

Here are the special ethnic touches: Kasha or buckwheat groats, a Slovenian staple, instead of pasta. Paprika, to reflect the Hungarian-influenced cooking of Prekmurje, a northeast border region. Pumpkin seed oil from Styria, a Slovenian-Austrian area to the north and east.  Chickpeas to evoke the spirit of Primorska, the Mediterranean region that borders Italy.  And feta, similar to the tangy Slovenian goat  cheese that was a breakfast favorite during my own visit to Slovenia a few years ago.

This dish is definitely Slovenian inspired, even if it is not a traditional recipe.  So I think it deserves a Slovenian name:  Ajdovi Salata, or Buckwheat Salad.

And one more plus I recently discovered: Thanks to the buckwheat, the salad is gluten-free!

I have made this salad four or five times in the past year. It's a flexible recipe. When we were preparing a cevapcici dinner for a friend on the East Coast recently, I even made it with couscous instead of kasha. Still good, but  I don't recommend skipping the buckwheat!

The recipe that follows is my most successful version so far.  I have followed Josef's original guidelines pretty closely.  To maximize the distinctive smokey-nutty taste,  I do recommend toasting the buckwheat, splurging on pumpkin seed oil, and using smoked paprika.

A word about buckwheat: Kasha is probably the form of buckwheat groats most familiar to Americans, especially in Jewish cooking.  It is usually pre-toasted, often cracked into smaller pieces, and generally packaged in boxes.  This recipe works best with whole buckwheat groats, often sold in bulk.  You may need to toast them yourself, as described below.

To learn more about buckwheat, check out the website for Burkitt Mills, probably the major grower and producer in the United States, or maybe the world.  It will tell you everything you need to know about buckwheat.  You can even buy seeds to grow your own!  (Once again, thanks to Josef for the suggestion!)

And here is an informative and entertaining new site about pumpkin seed oil, by the first American producer of this pricey-but-worth-it delicacy. 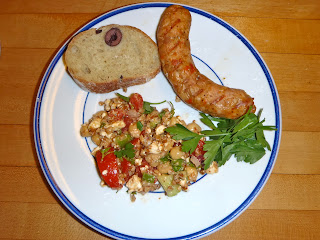 To prepare buckwheat: Toast the whole buckwheat groats in a dry skillet on medium-high heat, stirring constantly, for 5 minutes, until buckwheat grains have browned.   Add 1 ½ c. salted water and let come to a boil.  Reduce to a simmer, cover, and let cook for 15-20 minutes, or until water is absorbed.  Remove from heat and let sit, covered, for 5 minutes. Remove cover and fluff with a fork. Let cool. Measure out 1 ½ c. cooked buckwheat to use in salad. Save the rest.

To prepare salad:  Mix 1 ½ c. cooked buckwheat with remaining salad ingredients in a large bowl.  Sprinkle with seasonings and toss.

To assemble:  Pour dressing over salad and toss lightly but thoroughly.  Taste to adjust seasonings. Chill for several hours or overnight.  Garnish with additional parsley.

Since the feta, buckwheat, and chickpeas are all rich sources of protein, this salad can easily serve as a main course, with a little bread or a plain green salad on the side.  It also works well as a side dish to accompany a plain meat entree, like the sausage shown in the photo.  It's a good dish for a potluck.

But however you use it, this hearty salad is delicious and unusual.  Most recently, it impressed our wandering journalist son, who was visiting from his current home in Kosovo.