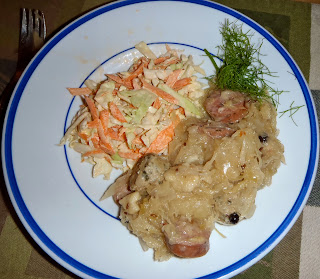 Before he left for work, my husband dropped me a hint.  We had three leftover sausages in the refrigerator, along with a nice jar of organic sauerkraut in the cupboard.

Normally, I would have rejected the idea of basing my weekly Slovenian dinner on leftovers.  But I was emerging from an intensive two-week marathon of ethnic cooking. Yesterday, it had culminated in my first-ever attempt at apple strudel, for the neighborhood Labor Day party.

So I was open to something simple, as long as it was Slovenian.

I found the perfect starting point on the English language version of Kulinarika, a Slovenian cooking site: Leftover Sausage Hot Dish.  The recipe had been submitted by an American reader, who said it was traditional Slovenian.

The recipe noted that sauerkraut could be substituted for cabbage. I decided to use my own well-seasoned roast sauerkraut recipe. I had everything else on hand except for the galuska, a dish I had never made before. I thought they were drop noodles, similar to German spaetzle. Woman's Glory, one of my vintage cookbooks, had a recipe.

It did seem a little odd to try a new recipe for dumplings, for the sole purpose of serving them as cut-up leftovers. On the other hand, I was glad that this week's dinner would involve at least a little real cooking.  Besides, those galuska would be easy, right?

Wrong.  That preliminary step in this "easy dish" was almost my undoing.  Read on.

Mix flour with baking powder and salt. In a smaller bowl, beat egg, milk, and oil together. Add liquid ingredients to dry ingredients.  Stir with fork until dough is stiff enough to drop from a spoon.  Drop spoons of dough into boiling salted water, cover, and simmer for 12-15 minutes.  Drain.

I assumed this recipe would be easy.  But the galuska were a disaster. They were gummy on the outside and barely held their shape.  At least half of them disintegrated in the colander.   When I cut one open, I discovered a hard lump of uncooked flour at the core!

(After the fact, I  have some idea of what went wrong.  I had added additional flour, under the assumption that the dough should be fairly stiff. In fact, as one set of instructions explained, the dough ought to be a "gooey mess."  Another problem:  I made the dumplings too big.  I should have dropped half-teaspoonfuls, at most, instead of the generous tablespoon I used.  This batch made 12 dumplings, instead of a bowl of little spaetzle-like squiggles.)

I salvaged about half the dumplings.  They looked like soggy anemic cauliflower florets. But  I pressed on. 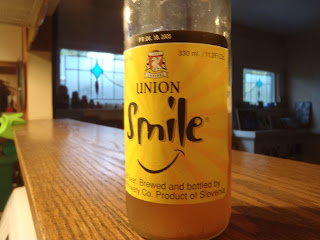 The sauerkraut-sausage mixture tasted good.  But my heart sank when I mixed in the galuska.  The original recipe had called for two cups, but I had just one cup left.  Already they were starting to fall apart.  Just like this crazy leftover dish.

The last straw came when I looked around for some liquid to add.  No chicken stock in the cupboard. No white wine in the refrigerator.  Beer was the final option.  I wasn't optimistic, since we aren't big beer drinkers.  But when we have a Cajun music jam, someone will usually bring a six-pack.

As I searched frantically in the refrigerator, I almost passed by the goofy-looking bottle with the yellow label and the smiley face.  But Union Smile turned out to be beer.  At this point, I wasn't inclined to be picky.  So I snatched it out of the refrigerator, popped off the cap, and dumped a generous half cup into the mess simmering on the stove.

Then I took a closer look at the label.   I read the small print at the bottom. 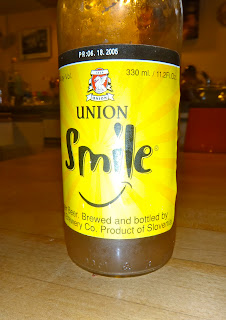 I had a good laugh. It was like a message from the source. Or at least from the folks in Ljubljana who make Union Smile Beer.

I needed to lighten up.

I took a sip.  Mild, but not bad.   I added more to the dish.  As it cooked, the galuska seemed to get smaller.  I imagined they must be dissolving into the sauce.  So it would turn into a cream sauce.  Oh well.  It was only dinner.  I kept smiling.

Until my husband got home and saw that half empty bottle of beer.  Oh no!  That beer had tasted terrible, he said. It had probably gone bad.

But when I protested that it tasted fine to me, he took a sip and agreed.   Mild, decent. Acceptable for cooking.

And when we sat down to dinner, the final verdict was a surprise.

That leftover sausage hot dish tasted good.  In fact, my husband loved it.

"The flavor is great. One of the best dishes you've made so far."

You never can tell.