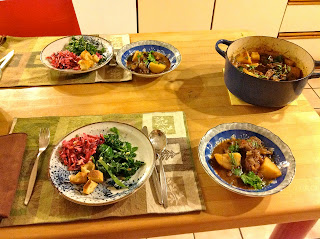 
I had made my first version of bograč, or Slovenian goulash soup, just four weeks earlier. Normally, I wouldn't be so quick to repeat a dish.  But that Week 32 Dinner had been a success and I had discovered that bograč could be made in advance. If anything, it had improved with reheating.

I needed a make-ahead dish today, because I had to go to my office in the afternoon, instead of working  from home.  So I started the goulash soup in the morning, cooked it for about an hour, and then refrigerated it.  When I returned home, I cooked it for another hour.

There are many approaches to making bograč.   So now I had the chance to experiment with a few variations. 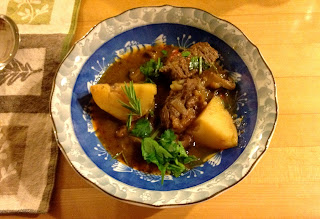 The basic recipe is here.  This time, I made the following changes :

I used all beef stew meat, instead of half pork.
I used 2 peppers (1 green and 1 red) instead of just 1.
I added part of a small hot red pepper, minced.
I skipped the tomatoes. Instead,
I added 2/3 c. dried mushrooms, soaked and sliced, along with their liquid.

And this time, I remembered to add two important seasoning boosts:

For the verdict, scroll down.

So how did Bograč II compare to the first version?  I did like the seasoning additions. Next time, I might go back to using some tomatoes.   I do think the dish is better with two different kinds of meat.  And pork is more tender than beef, I am coming to realize, so I will probably go back to the beef-pork mix.

The bottom line is that you can't go wrong with bograč!