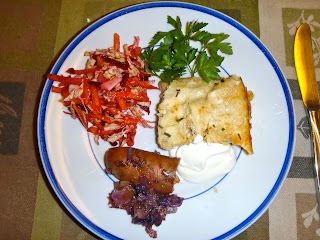 However you name it, the dish comes down to this: Potato lasagna.  Not so appealing, at first blush.

I discovered Pierogi Casserole on the website of an ethnic radio station in Cleveland.  It sounded like a bland, white-on-white, carb-heavy nightmare.  And even though it was identified as Slovenian on that website, and on a few of the others, I had my doubts.

But it turned out to be more than I expected—and more traditional than I realized.

Most of these recipes are simple:  Lasagna noodles are layered with a filling of mashed potatoes, enhanced with cheese and onions, and maybe a little garlic.  It does sound like the casserole approach to pierogi, the popular Polish boiled dumpling that commonly features a potato filling.

But this dish could just as easily be considered the deconstructed version of a famous Slovenian speciality, Idrija-style žlikrofi.

Žlikrofi are the Slovenian version of boiled, filled dumplings.  Sometimes they are referred to as ravioli. I had already made a meat version, as well as a tasty buckwheat-cheese variation.  I had been planning to try the popular version from Idrija.  It is made with a unique potato filling, a little more complex than the Polish style.  So this would be the perfect opportunity.

To come up with the recipe below, I combined a few different recipes for pierogi lasagna. The herbs and the bacon are the special Slovenian touches I added, inspired by the traditional filling for Idrija žlikrofi. 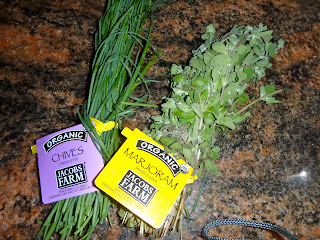 A word about the pasta: I had planned to use the  conventional variety, which requires boiling in advance.  But I came across a no-boil version, which I had used once or twice in the past.  Since I was pressed for time, I decided to give it a try.

It turned out to be an ideal choice for this particular dish. The noodles were thin and flat. The brand I used was Barilla Oven Ready Lasagna.  Afterward, I discovered that this company's style is different on two counts: the pasta is rolled rather than extruded, and it includes eggs.  So it results in a thin, delicate noodle that is much like the homemade noodle dough you might roll by hand.

The one caveat about using no boil lasagna is that the filling needs to be moister than usual.  Since this potato filling is fairly dry, you will probably need to add some potato liquid before baking, as I suggest below. 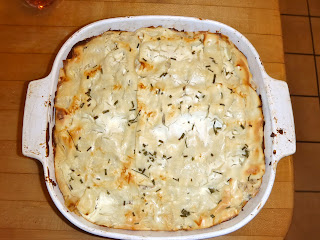 Cut onions in half vertically, then cut each half into thin slices. In a skillet, brown the onion slices  in olive oil until almost carmelized. Add the garlic and bacon. Continue to cook, stirring, until bacon is cooked.  Let cool.

Meanwhile, wash and halve the potatoes, leaving skins on. Cook in boiling salted water until tender.  Drain.  Be sure to save liquid.  When cool, mash the potatoes,  adding a little potato liquid if needed.  Stir in the onion-bacon mixture,  grated cheese, sour cream, and seasonings. If needed, add more sour cream or potato liquid to make filling spreadable. Taste and adjust seasonings. The filling should be highly seasoned, for the dish to be a success!

If lasagna noodes require pre-cooking, prepare according to package directions.   I used the flat, no-boil lasagna noodles made by Barilla, which I recommend.  You will need about ¾ lb.

Oil a 9 x 9 inch casserole dish.  Alternate 4 layers of noodles with 3 layers of filling, beginning and ending with noodles.  Top with a thin layer of sour cream.  Add a sprinkle of  parmesan cheese and chives.

Can be refrigerated, covered, until baking.

Bring to room temperature.  If lasagna appears too dry, pierce noodles with a sharp knife and add some potato water.  Bake at 350 degrees for 40-45 minutes.   Cover with foil if top becomes too brown.

Let cool and cut into squares to serve, with additional sour cream if desired.

For the final verdict, scroll down to the end of the photos.


The surprising verdict: Delicious!   One of those more-than-meet-the-eye dishes.   I did work hard to make the potato filling highly seasoned, which I think makes all the difference.  My husband thought I could have added even more bacon.

Was it a little carb-heavy?   For an entree, probably so.  But it is easy enough to add another protein source, like the leftover sausage with red cabbage we had on hand. (Remember, it's all about portion control!)   I expect to make this unusual dish again.