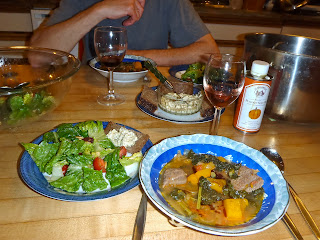 Pumpkin seed oil is a traditional specialty of Styria, an Alpine region that includes parts of present-day Austria and Slovenia.  The oil, which is sometimes referred to as black gold, is also a major export in both countries.

The pumpkin reached Europe by way of Christopher Columbus, who discovered it in North America.  So it is ironic that pumpkin seed oil has only recently started to become known in the United States.

Pumpkin seed oil has become a staple in my kitchen, now that I have begun to venture outside my vintage Slovenian American cookbook collection.  This delicacy was probably unavailable, and perhaps unknown, to working class ethnic families in the 1950s.

I have found many uses for this exotic oil. In vinaigrette dressing, of course.  As a marinade for chicken.  In kasha Mediterranean salad and tuna salad.  In an original biscotti recipe.  Even on ice cream. But I have never made a Slovenian dish that included the pumpkin itself.

So I set myself a challenge this week: To use pumpkin in every course.  And to use it all: flesh, seeds, and oil.

It started with a trip to the organic produce market around the corner.  I was tempted to scale the giant mound of pumpkins the market sets out each fall, for the amusement of climbing children.  But I thought better of it. 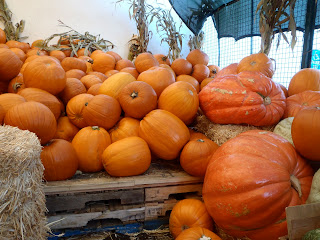 Off to the side, I found a display of small, sweet pie pumpkins.  I picked out a nice specimen.  I also bought some toasted, shelled pumpkin seeds in the bulk nut section of the market, along with the fresh vegetables I would need for dinner. 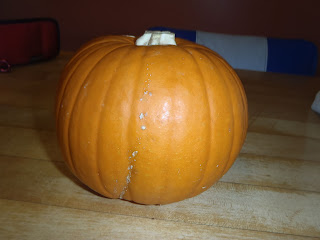 Back home, I already had some pungent Styrian pumpkin oil.  This one was bottled in France and produced in Austria. 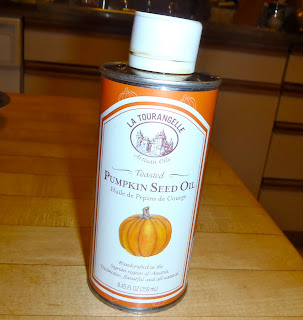 The appetizer course would be easy.  I had already come across a number of simple recipes for cottage cheese-pumpkin seed oil spread, a popular starter in Slovenia as well as Austria.  Even the official Slovenian government tourist website offered a recipe.  I combined a few to come up with my own version.

The salad course would be simple. A green lettuce salad, with cherry tomatoes and olives, tossed with an oil-and-vinegar dressing, along with a touch of pumpkin seed oil.   I planned to top it with whole, toasted seeds from that pumpkin I bought at the market.  (My husband ended up taking charge of the seed-roasting and salad-making.)

The challenge? Finding a main course with fresh pumpkin.  I couldn't seem to find any Slovenian recipes. Finally, I  found something called pumpkin hot pot, on the website of a pumpkin seed oil company in Austria.

(Here is a similar site, for a Slovenian company.  And here is the website for the first American producer of pumpkin seed oil.)

This dish sounded intriguing: chunks of beef, pumpkin and tomatoes, combined with greens, scented with basil and garnished with a drizzle of pumpkin seed oil.  I suspected that kale would be the perfect choice for the greens.  I was right. 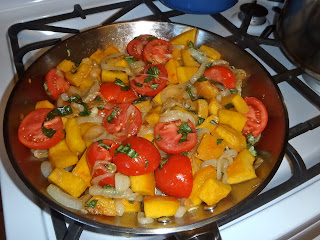 The verdict?  This was one of my most successful dinners so far!

I had made the salad before.  My husband's version was especially tasty.

The simple starter was so easy, it was hard to believe it was so good.  The mixture of white cheese and green-black pumpkin seed oil created a fascinating alchemy.  The spread turned light green and it had a delicate tang.  The seeds added a nice crunch.

But the real standout was that pumpkin hot pot.  It was pure Central European umami! Pungent and nutty, sweet and tart.  Musky.  My husband and I could barely stop eating it.

Fortunately, we did, because it was even better the next day.

A pumpkin-themed dessert might have been gilding the lily.  But the only reason we skipped it was practical: no vanilla ice cream.  The market was out of it.

Otherwise,  I would have made the traditional dessert we had enjoyed a few months earlier: Ice cream topped with homemade pumpkin seed brittle in syrup and a drizzle of pumpkin seed oil! 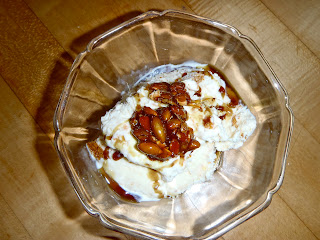 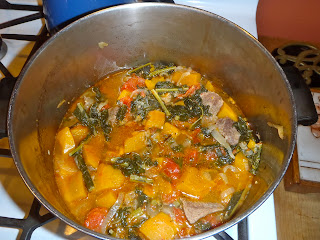 In the meantime, peel and cube pumpkin.  (Save seeds to roast for salad.)  Slice onion into thin rings.  Brown in olive oil in skillet until starting to carmelize.  Add pumpkin cubes and cook 5 minutes.  Add tomatoes and basil.  Cook 5 more minutes.  Add to beef,  after it has been cooking for 1 hour.  Simmer another hour.  Add vinegar to taste.  To serve, ladle into flat soup bowls and drizzle with pumpkin seed oil. 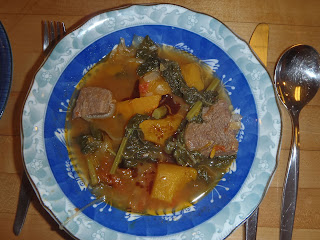 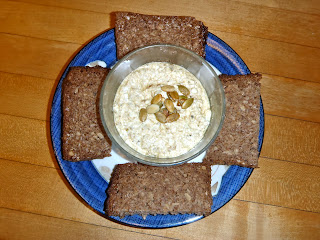 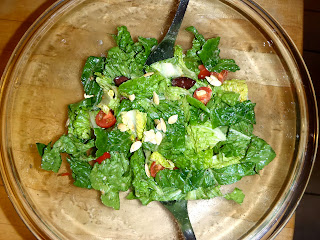 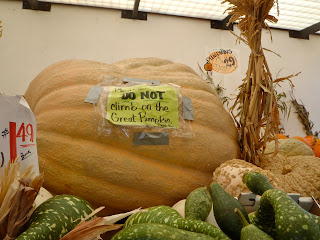