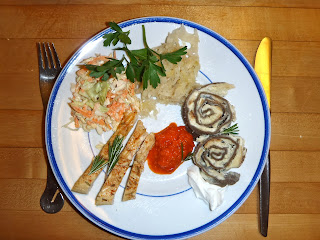 
I wanted to make an impressive Slovenian dinner for our son, who was visiting from Kosovo.  But I didn't want to take too many chances.  So variations on a previously successful theme seemed like a wise path.

Struklji immediately came to mind.  The rolled boiled dumpling is unusual, quintessentially Slovenian, and it offers many filling options. The dish was quite a success, the first time around, when I made a cheese-filled buckwheat version.   It was also one of the recipes featured in the Slovenian cooking article I wrote for Kosovo 2.0 magazine

And just in case the struklji seemed too much like a side dish, I decided to add a meatier entree: a variant of the thin, grilled boneless smoked paprika chicken breasts I had made a few weeks earlier.

I had started to become curious about the herbs used in Slovenian cooking.  So this seemed like a good time to try out a sweet tarragon version of the cheese filling for the struklji.   And maybe I could add some rosemary to the paprika chicken breasts, along with a little pumpkin seed oil, for an extra Slovenian touch.

I already knew that a tarragon filling is traditional in struklji and potica.  But I wondered about rosemary with chicken.  Is that something that a Slovenian, or at least an ex-Yugoslav, might do?

In searching the Internet, I found my answer in an amusing essay called Dinner with Tito, in a blog called Palachinka.

Josip Broz Tito, the fabled Yugoslav strongman, had a mixed ethnic heritage that personified his country's vision of South Slav unity:  He had a Croatian father, a Slovenian mother, and a Serbian wife. His Croatian village, which we had visited on our trip to Eastern Europe, was shouting distance from the Slovenian border.

Tito was also “a communist with style,” according to the blogger. He was a World War II hero of the Resistance, a ladies' man and a gourmet.  Evidently, Tito's favorite dish was Russian Style Chicken.  It was a pressed boneless chicken, flavored with rosemary and cognac.  The other favorite mentioned in this blog post? A Croatian version of struklji.

So I had come up with a meal that would have impressed Tito.  But what would our Balkan journalist son think?

Follow the directions for Smoked Paprika Chicken Breasts, with the following change:

For 2 whole chicken breasts, make a paste with:

Follow the recipe for Buckwheat Struklji in Week 10, with the following change:


The chicken breast looked and tasted good. But I preferred the first version, which had a deeper paprika color and a crustier coating.  In this second version, the oil-spice mix seemed more like a conventional marinade. Perhaps it was the result of using less paprika, coupled with the addition of fresh, rather than dried, rosemary.

The struklji presented a challenge.  I'd had my doubts about the filling, because I associate tarragon with salad dressings and savoury dishes.  But I discovered that tarragon has a faint taste of licorice, which works well in a mildly sweet cheese filling. So the filling tasted just fine.

The problem emerged when I tried to unroll the long, boiled dumpling from the cheese cloth.  The first time, it worked like a charm.  But this time, the cheesecloth stuck.  It was as though the outer layer of dough had created a gummy glue.

My husband came to my rescue.  But the buckwheat dough still wouldn't come loose from the cheesecloth wrapping. Those mangled slices did taste good. But the brown-and-white spirals weren't nearly as pretty, this time around.

I don't know what created the problem.  Using farmer cheese instead of ricotta? Perhaps that created a moister filling.  Replacing an egg with two egg whites? Adding a little too much water to the dough?  Not wringing out the cheesecloth enough, or adding too few layers?  Cooking is always an adventure.

Despite my fretting,  the dinner was a success.

Our son seemed to enjoy it.  Of course, he couldn't resist a back-handed compliment.

Well, except for the bright red ajvar, I suppose the dinner was a study in pale earth tones.

Tito would have been easier to impress.