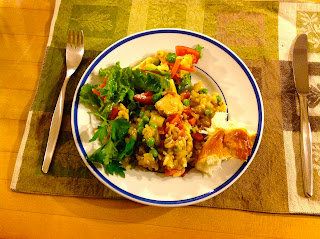 
Tuesday of Week 37 fell on the evening of Yom Kippur.  For Jews, sundown would mark the beginning of a day of fasting and repentance.

Although the Yom Kippur Eve meal doesn't have ritual significance, some foods are traditionally chosen.  Simple, mildly seasoned foods are said to make the fast easier.  In many communities, chicken and rice are favored entrees.

I wanted to make a meal that would fit within these two traditions, Slovenian and Jewish, that are a part of my family life.

I immediately thought about rižota.  Slovenian risotto. Months earlier, I had made a delicious meat version. In doing research for the dish, I recalled some mention of substituting chicken for the more usual beef, veal or pork.   But I wasn't sure.

So I went back to the handful of recipes I had found in my vintage Slovenian American cookbooks.  Yes, one of those recipes made a passing reference to using chicken instead of meat.  But I had completely overlooked the one recipe that was designed with chicken in mind.

The Progressive Slovene Women of America had a recipe they called Chicken and Rice. In parentheses, they mentioned the proper Slovenian name.  Rižota.

So I was on solid ground.  It seemed like an ideal dish for Yom Kippur Eve.

I followed the same recipe I used for that Week 21 Dinner, with a few changes:

Instead of the beef-pork mix, I used boneless, skinless chicken breasts, cut up.

This time, I remembered to use the short-grained Arborio rice.

And at the end, I splashed in a little white wine

There was one other change:  No parmesan cheese on top.  That would be very untraditional, even for Jewish families who don't strictly observe the Jewish dietary laws.

The verdict:  Delicious!  A simple dish, made even more flavorful with the inclusion of additional vegetables and a little wine. 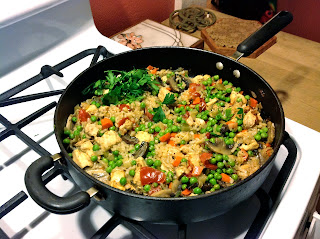