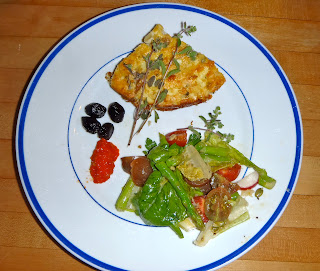 I found this unusual mushroom-asparagus souffle in a contemporary source:  The Food and Cooking of Slovenia (2009), by Slovenian professor and cooking expert Janez Bogataj, Ph.D.

This beautifully produced book has received much attention, at least in Slovenian American circles. So I was excited to discover that I could browse through the online preview.  But I promised myself :  I wouldn't add it to my cookbook collection just yet.  For now, I wanted to retain my focus on vintage Slovenian American cooking.  I assumed this glossy book was a modern take on Slovenian food.  But I was wrong.

Take this egg dish.  It definitely qualifies as vintage.  It first appeared in 1868, in a book by Magdalena Pleiweis.  This was one of the earliest Slovenian cookbooks, and the first one to be copyrighted.  It was also the first dish to be named for a particular place: Ljubljana, Slovenia's largest city and now the small nation's capital.

I was intrigued by this dish, which sounded like a cross between a mushroom-asparagus omelet and a souffle, partly because it had such a contemporary feeling.  It was hard to believe that a delicate, elegant-sounding brunch dish was in vogue in 1860s Slovenia, even among city-dwellers.  I doubt that it had a place in the kitchens of my own peasant ancestors, and it doesn't seem to have become a part of the Slovenian American cooking repertoire.

Subsequently, I found a version of the recipe in a Milwaukee newspaper article about Slovenian cooking and Dr. Bogataj's book.  This recipe, presented with the American cook in mind, looked even easier to follow.  So I made a mental note to come back to it, when the time was right.

On Tuesday of Week 35,  the time felt right.  My husband and I were feeling drained after a weekend trip to Chicago, where we had attended another memorial service for our friend who had died in the summer. We came home to more sad news, the death of my husband's stepfather.

The thought of a light, meat-free souffle for dinner seemed appealing.  So I went back to that newspaper article and followed the recipe, making just a few small modifications.   I also expanded the directions.  To follow this recipe, which was more elaborate than I realized,  read on. 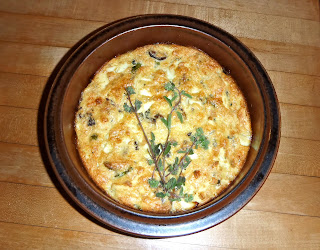 
First, prepare the mushrooms.  I found morels too pricey, so I used a small bag of mixed wild mushrooms. Rinse mushrooms and then either boil or soak in very hot water.  (Note: There are two schools of thought about this. Some argue that boiling creates a tasty broth, but is not a good idea if you want to use the mushrooms themselves in cooking.) Drain the softened mushrooms, saving the liquid for another use.  Slice mushrooms and set aside in a small bowl.

Crumble French bread or roll into a small bowl, add  milk, and set aside to soak.

Squeeze milk from bread and discard.  Add half the bread to the sieved cooked egg yolks, along with 1 T. softened butter.  Mix, then add the raw egg yolks.  Mix well.

Beat the egg whites in a medium bowl until stiff, adding a pinch of salt if desired. Fold them into the egg yolk mixture.  Add marjoram,  the remaining salt, lemon rind, sour cream,  and the remaining half of bread.  Fold and mix until well combined.

In a skillet, saute the sliced mushrooms in 1 T. butter for two minutes.  Add parsley, white wine, and asparagus tips. (Note: the recipe considers the asparagus optional and calls for 1 ounce.  I consider it essential and used a good half cup, plus more asparagus in the salad!)

Butter a souffle dish.  Spread one third of the egg mixture on the bottom.  Add half the mushroom-asparagus mixture and then half  the egg white slices.  Repeat, ending with a final layer of egg mixture.

Bake at 350 degrees for about 30 minutes, until the egg dish is browned and set.

I  garnished the egg dish with a few branches of fresh marjoram and served it with a green salad, along with a few olives and some ajvar.

How did it taste?  Scroll to the end of the photos to find out!

The verdict:   The Ljubljana Egg dish is indeed an unusual concoction. It seems to exist in a culinary border region, somewhere between an airy omelet and a dense souffle.  The elaborate preparation process does seem hard to justify, given the end result.  It is definitely another one of those Slovenian dishes with simple ingredients combined in complex ways.  It tasted fine but the texture was odd. Sliced cooked egg white, baked for the second time, is definitely an acquired taste.  I have to confess that I am not in a rush to make this again.

Still, I am very glad I tackled this intriguing dish. It was like taking a step back into Slovenian history.  It gave me a glimpse into a refined nineteenth century urban culture that I, like many Slovenian Americans, know little about.  So that is a good thing.